2012 Spring Game Report: Where We Really Aren't Sure If We Learned Anything Or Not

Share All sharing options for: 2012 Spring Game Report: Where We Really Aren't Sure If We Learned Anything Or Not 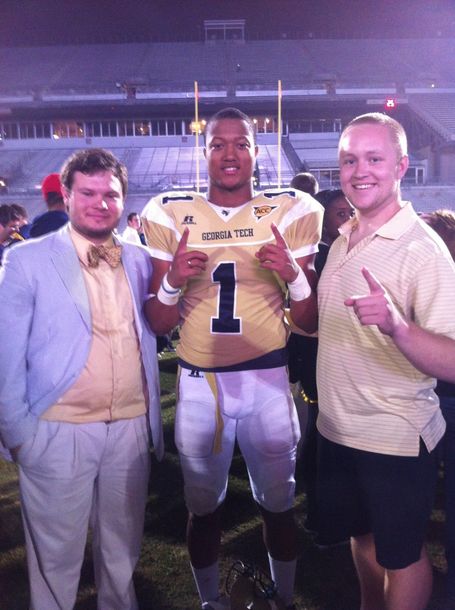 We got pictures with a few players, because we're just that cool. This is Isaiah Johnson, who I've known since freshman year due to an awkward bus conversation where I thought he looked like Charles Perkins.

As I'm sure you are aware by now, the Georgia Tech football team had its annual T-Day Spring Game on Friday night. Always such a confusing occasion, as you have us playing against us, and so it's really uncomfortable trying to pick who to cheer for. So my strategy has always been to pick one team and cheer them, and jeer the other team, if nothing else for my own pure entertainment. I was even walking to class yesterday in Tech Square and passed a couple football players, and was unsure on whether or not to tell them "Good luck tonight!" Just a really weird situation.

Anyways, after a little bit of pre-game tailgating (campus was awesome, big props to the marketing department for making this game an awesome party of a spring game) we headed to the stadium, and I have some notes from the game. Without further ado, here are some questions that we got answered in varying degrees.

We have 5 players in the secondary with only 4 spots to fit them in at. So who's where? First team defense included a secondary of Louis Young and Roderick Sweeting at corner, backed by Fred Holton and Isaiah Johnson at safety. Jemea Thomas looked to be the third corner, as he got subbed in throughout the game (just not in the first couple drives). Jamal Golden was playing corner for the second team, and they think that he's the next special player in our defensive backfield. Also, Corey Dennis played safety for the second string and looked to hold down the fort back there just fine (including a scoop-six on a very wild play in the early second half).

We have a new special teams coordinator. Is Beamer Walkosky-ball a thing yet?? There were no live special teams, because a lot of the idea of special teams is to create giant car wrecks on the field, which is not good when you don't want folks to get injured. However, a number of punt returners were used, including Zenon, Bostic, Sims, and Young (I think there were more, I just stopped taking notes after a while). Sims dropped a punt he was to field but other than that they seemed to do a good job getting under the ball and catching it. Punting looked pretty decent too, which is always good.

DID VAD LEE VAD LEE THE VAD LEE VAD LEE-LY??? (Translated from internet circlejerk-speak, what's the QB situation like?) As we've heard, Synjyn Days is quite a runner, Vad Lee is quite a passer, and Tevin is quite a game manager/decision maker. Unfortunately, any combination of the other two don't specialize in whatever the third guy does (watching Days throw what looked like about a 30-yard sideline pass that ended up hitting the brick wall right in front of the first row was at least slightly unsettling...he missed on a few passes BADLY), so we need to make some improvements or we'll be deciding on our priorities at QB come the fall. Word on the street says that Days is likely looking at a move to A-Back, which I think would be a smart one knowing his running ability. That would make Lee the second-string QB, and as much as everyone thinks Tevin is the guaranteed starter, Coach Johnson made a comment recently to remind folks that there are 33 practices left until we kick off in Blacksburg, making me think it's far from a done deal at this point. Stay tuned...

More pictures and questions answered (at least somewhat) after the jump!

Alright, no more circlejerking, but seriously how did Vad Lee do? Lee ran the first string offense in the second half, Days the second. Lee really made some impressive passes (even while running at times) and looked pretty good scrambling too. Dennis Andrews also got some time in the second half, and he looked very impressive for having been through just 3 weeks of practice. He's a good runner himself, very shifty and pretty fast. Knowing that Justin Thomas looked quite a bit faster on tape than Andrews did is a somewhat scary thought too.

Is the new-and-improved O-line a total force? No, it looked really weak, but we also know how depleted it is. We're missing at least 3 starters (Uzzi, Mason, Jackson) and that's just the ones I can think of off the top of my head. We're also missing a few guys who aren't starting yet. Hopefully getting guys back from injury will go a long way.

Does the 3-4 work yet? Defense looked really good, but who knows how much of that was a function of the O-Line. It looks like Jabari Hunt-Days has solidified himself as the #2 ILB behind Daniel Drummond, and he very well could pass him given Drummond's suspension (along with his ability/Drummond's inability to cover the pass). The secondary was also really impressive all night. That's going to be a special unit this fall. 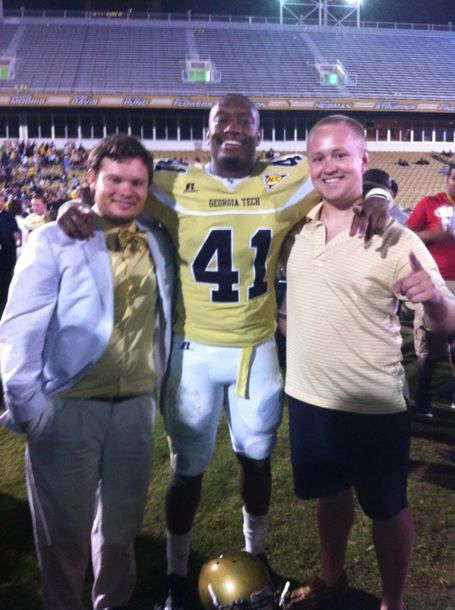 Fine. But we ran most of our plays out of the shotgun/pistol formations that we've been working so hard on, right? We saw no shotgun or pistol formations the entire game, making me think that the coaches and writers are just in on a big troll-job at this point. Here the fans were all excited and such about formations not involving the QB having his hands all up in the center's no-no square, and yet that happening on the Flats under Johnson is apparently as real as Big Foot. Seriously though, Johnson keeps saying that these formations are more meant to be for situational use when they would be beneficial in passing (or when the defense is really locking down the Triple Option). So minimal work on it and no real situational need sorta justifies not running it at all on Friday.

You're the recruiting guy, we did a little of that right? We had a number of commits from this year and recruits for next year in attendance. The only one I can confirm there was Beau Hankins, who I recognized due to what I believe is called a fade-top haircut. I said hey to him and he seemed really excited to be here in the fall. I felt so cool for talking to a football player, maybe I DO have a future in sports journalism. Also a fun tidbit, you've heard of the two Tri-Cities offensive linemen Jeremi Hall and Shamier Devine. Hall was not in attendance because he and his girlfriend were at the prom. So cute!

There are always alumni at the game. Did Stephen Hill drop any passes? They brought back some recent alumni of the program, and I had the opportunity to talk to Jerrard Terrant and Jason Peters briefly. Tarrant is headed for the Canadian Football League while Peters has his name in the NFL Draft next week. He's not highly ranked at DE (#57 DE by nfldraftscout.com) but he seems skilled enough to at least pull a Kevin Cone and get signed to a practice squad. If not, it really sucks for him because now he's out in the cold with no job and nothing but a Georgia Tech BSBA degree and MBA degree to fall back on...and no, Hill did not drop any passes, and in case any NFL Scouts are reading this, THIS IS TOTALLY A JOKE BECAUSE WE ALL KNOW STEPHEN HILL PUTS CALVIN JOHNSON TO SHAME WHEN IT COMES TO CATCHING THE BALL.

So how did the whole "Spring Game on a Friday" deal go? On a slightly different note, I do want to praise the marketing department for making this spring game a huge success. I have a number of friends who said this was, by far, the best spring game they'd been to. It was made out to be nothing but a giant party, and it absolutely was. We had around 18,000 fans of all ages there just enjoying the Friday night and enjoying a small oasis of game day in the middle of a very long offseason. The recruits we brought in for the game seemed to really enjoy it as well, and I've read that Naim Mustafaa in particular had a blast. Hopefully this is something we can build on in the coming years and really make into a great tradition.

Did you go to the game? What did you see? What were your impressions of Vad Lee? Did you like the overall experience? Let's hear it.

Also, in a completely foreseeable occurrance, the Monday Morning Mustache will not be on a mustache, and for what it's worth it won't be on Monday either. Post is to come tomorrow, and it will feature, you guessed it, the white helmets.