W Stands for Wednesday, As Well As For Something Our Men's Basketball Team Hasn't Made a Habit of Doing This Season

Share All sharing options for: W Stands for Wednesday, As Well As For Something Our Men's Basketball Team Hasn't Made a Habit of Doing This Season

On the eve of the 2012 ACC Men's Basketball Tournament starting, I thought I would take a look back at the season that was, providing some insight on what we should be encouraged about when looking ahead to next year. I'll break it down by month, and each month will include one of Coach Gregory's many entertaining facial expressions as a representation of how it went.

We went 4-3 in the first month of the season, and while it was a little comforting having an above .500 record, a 13-point loss to St. Joe's and a 9-point loss to LSU were pretty unsettling. I was at the Northwestern game at Phillips, and it was a pretty bad loss. Not because Northwestern's a bad team (they're currently on the bubble of making the Dance), but because we just looked awful. A major bright spot for us was a big 13-point win over the Virginia Commonwealth Rams, who finished 28-6 and CAA champs, and who you might remember went to the Final Four last year. 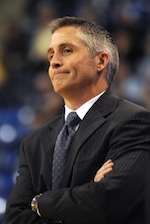 Coach Gregory is not amused. (via)

December's probably where the fanbase started struggling with any emotional attachment they had to the team. We had a good win over georgie in Athens that excited folks around the program and ignited another two wins, but back-to-back 6-point losses against Mercer (at home!) and at Fordham (which went 10-19 overall and 3-13 in the Atlantic 10...) were really not a good sign looking forward. I went to the Alabama A&M game on Dec 19, and while it was a win, it was awfully easy to see that we were struggling to beat a team that we would have expected to stomp. We didn't pull away until about 3/4 of the way through the game (maybe later), and that was pretty hard to watch. Also hard to watch was an AAM fan who was probably about a solid 350lbs of fat and obnoxious. Our band played the fight song as the players were running to the locker room after warm ups, and he subsequently stood up, clapping and singing the A&M song. Seriously, parents were covering their kids' eyes. Also our band reciprocated by pointing right at him and blasting a very satisfying chord progression. 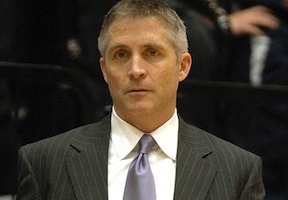 (rest of the season after the jump)

January was not good to us. We lost 7 of 8 games, including the final 5. Alabama took us to the woodshed in a 25-point loss, we failed to score 40 points in a 32-point loss against Virginia, and lost by 15 to Miami. Oh, and those are just the home games we lost. One bright spot that came out of this month, in my opinion, was our performances against the North Carolina teams. Yes, we lost two of them. But we beat NC State, and here's the thing that I took away from the other two games: a team that lost to Mercer and Fordham in December took two teams that are jockeying for 1- and 2-seeds in the NCAA tournament to their limit. We lost by 7 at home to Duke (in a game where Duke fans packed Phillips Arena) and refused to quit in closing a 20-point deficit to at 12-point loss. For me, it sucks that we lost, but that we can play two teams hard that would beat most any team in the country is pretty encouraging.

February was the dagger in the spirit of this team and the fanbase. We had multiple losses at home that followed wins over those teams on the road, when we won on the road and lost at home to NC State and Boston College. We took a decent team in Virginia Tech to its limit at their home, only to lose on a last-second jumper in overtime. Talk about deflating for a team that was 2-9 in conference coming into that game. Even more fun for the team came after that VT game, when leading scorer and who I would consider team MVP Glen Rice, Jr was suspended for unspecified reasons (likely just a violation of team rules, but a rule that Gregory would rather not go public about Rice breaking). He hasn't played since, but we've won 2 out of 4 games since then. You know, because that makes sense.

What do you mean suspend my star player?? (via)

I just want to take this moment and point out that we have yet to lose in this month, meaning March may be the time for this team. It could also be the month that's only had 6 days and 1 game in it to date, but that's entirely besides the point. Also irrelevant is that the game was against one of two other ACC teams that are about as bad as we are this season. We beat Wake Forest by 7 on Senior Night last Saturday, sending off guards Pierre Jordan, Derek Craig, and Nick Foreman in style. We open ACC Tournament play tomorrow (Thursday) at 9pm at Phillips Arena against the Miami Hurricanes. Nobody expects too much from us in the game (or tournament), and Miami appears to be another bubble team. But seriously, we're undefeated so far this month and would love to play spoiler by beating Miami and keeping the thugs out of the Dance.

It's been a season with few bright spots for our Yellow Jackets. But at the end of the day, there weren't many people who expected too much out of this team. With a new head coach, a new system, and some of Paul Hewitt's recruits jumping ship, we had a lot of work to do and really didn't have much to work with. I have lots of faith in Coach Brian Gregory. Coming out of Tom Izzo's coaching tree suggests he's a pretty good defensive mind, and as I saw it if there was one thing that we did well it was defense. He also earned a lot of my respect as a coach when he suspended the star of the team, meaning he's more concerned with running a tight ship than with winning at all costs. For next year we have 3 solid recruits coming in (two of them are 4-star prospects) and we'll have a year of Gregory's system under our belts. I can't promise that we'll win the national title next year or anything, but I do think it's fair to expect us to be highly improved in year #2 under CBG. A lot of our issues came offensively with hitting shots, something that can be fixed with a simple change in luck. To make use of awesome catch phrases, it's always darkest before the dawn, and I think that cliché fits our program perfectly when looking to next year and our future under Coach Gregory. 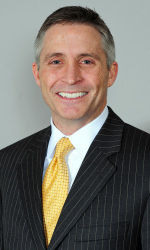 No worries bros, I got this. (via)