With the Final Four looming in New Orleans this weekend, who looks to take the coveted spot along our "Sidebar of Fantasy Champions" for NCAA Tournament Pick 'Em? Top 10 below: 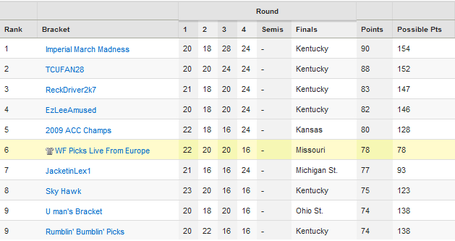 Missouri?! What was I thinking?! We could have some major drama if we see a Kentucky vs. Kansas National Championship Game between "Imperial March Madness" and "2009 ACC Champs".

Rest of the rankings can be viewed here.

What was your best pick of the tournament? Mine was NC State going to the Sweet 16.