Howdy everyone! Its that time of week again, where I take you on an adventure around the diamond and land you in the middle of math-ville! But first, I want to tell you about two things: our first full length video premiers tomorrow! That's right, you get me and Joey making fools of ourselves! On video! You couldn't ask for more! Secondly, something I can't remember right now.

Ok, now let's get into it. Kudos again to Gregg Hines for somehow being bored enough while designing airplanes to take care of the record-keeping.

The first thing I want to talk about from this past week in beesball is the one of the best things: Buckkkkkkk (the extra k's are for obvious reasons) Farmer's pitching. His line, along with the stats for the rest of the staff, can be found below. As usual, the guys in red don't have at least 10 IP, the others do.

What's unusual for Farmer is his high FIP (here's a great video explaining FIP in under 2 minutes). Normally guys with high K rates like his have high low FIP numbers, as you may be able to discern from the formula above. What that tells me (read: what that tells Gregg who then told it to me) is that when guys make contact with Farmer's pitches, they generally hit the crap out of them. For example, he has 4 HR, the most of the team. GT isn't keeping track of slugging against, and this freakin bus internet (I'm on my way to Charlotte right now) won't let Google work so I can't find that. His BA against, though, is low at .240 which makes sense for a strikeout guy like him. Our other pitchers, on the other hand, seem to be the opposite. They like to let guys get contact but its weak stuff. I don't know what it is about Farmer that makes his contact so much worse than everyone elses', my guess is when he hangs it he hangs it high and inside more often than not.

Now to focus on the opponent. The Virginia Tech Non-Flying Dickless Brids come to Atlanta with a 14-4 record, but like us have only faced one quality opponent in UVA. Also like us, they went 1-2 against said quality opponent, so this is a pretty important series as far as the standings are concerned. They sport a team BA of .306 to our .313 but their rotation is very top heavy compared to ours: 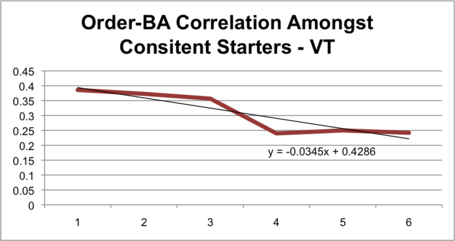 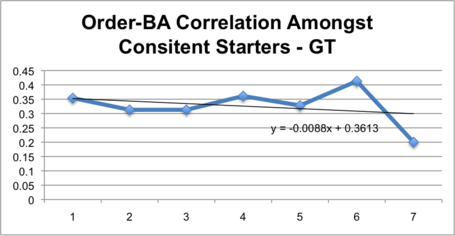 "Consistent Starters" is defined as players with >= 50 AB. As you can see, they fall off pretty quickly after the 3 hole. We stay consistent throughout the order, and if it wasn't for the 7th man then we would have a positive trendline (which would make Danny Hall a pretty bad manager, actually). I think that combined with their .306 BA against should give us this series. Unless Cole Pitts is still injured (he shouldn't be, he pitched Tuesday night for an inning) and a freshman gets blown up on Saturday in the first three innings again. Then we're screwed. Go Joltin Jackets!