An announcement was made last Friday of the NCAA's upholding of the sanctions it levied against Georgia Tech due to the alleged illegal benefits allegedly received by Demaryius Thomas and Morgan Burnett....allegedly. It is unfortunate, and Tech fans everywhere are less than thrilled over the punishment that included the return of our 2009 ACC Championship trophy. Honestly, I can't stand the fact that we were given such nasty punishments. Here are my top 5 reasons as to why this sucks so bad.

Share All sharing options for: My Top 5 Reasons Why the NCAA's Upholding of Georgia Tech's Sanctions Sucks

The initial reason for investigating Demaryius Thomas was his receiving $312 worth of clothes from who was believed to be an agent by the NCAA, but turned out to be his cousin's roommate. Also, he never wore the clothes and returned them to the NCAA with the tags intact. So basically, at the end of the day, the NCAA had no real reason to investigate us in the first place. It's like being pulled over for driving a car that's licensed to someone with a suspended license (even though you haven't stolen the car and have a valid license) and getting a ticket for not wearing a seat belt -- the reason for initial contact with authorities has nothing to do with the reason you were punished, and in reality you weren't doing anything wrong to begin with. That sucks.

2) The Investigation Was Conducted By A UNC Alumnus

At first glance, you may wonder the relevance of this. Why would someone who came out of a fellow ACC school have it out for us? We're not rivals with UNC and there's no reason that he would have ill will towards us, right? Well, partially. Keep in mind that UNC has been under investigations themselves, which ended in the firing of their head coach Butch Davis prior to the 2011 season, and more recently a 2012 postseason ban and the loss of 15 scholarships over the next 3 years. Needless to say, the NCAA was going to come down hard on them, and I'm sure someone on the inside saw the storm brewing. So now you have someone on the inside who is likely aware that his alma mater is in hot water with the NCAA, and to make matters more interesting, he's conducting an investigation of his own. Now, I'm not going to suggest that he wanted revenge or wanted to make his school look a little less bad through giving us ridiculous sanctions, but I WILL say that it was very, very poor judgment by the NCAA to put someone into power who could possibly have any incentive to not be 100% impartial and objective. If they really knew what they were doing, they would have taken someone with no affiliation whatsoever with Tech (i.e. not affiliated with an ACC school or georgie), and whose alma mater has not been affected by major sanctions any time recently. Again, it's not that he wasn't impartial, but the problem I have is that there's a legitimate reason to call into question whether his judgment could have been impaired, which is enough to make his appointment a poor move by the NCAA.

3) The Punishment Is Inconsistent With Precedents

One of the most glaring issues with the punishment Tech received was how harsh it was in relation to the infractions committed. I understand that the NCAA wanted to punish us for noncompliance, but between our athletic department calling into serious question that accused level of compliance and the fact that the infraction was never fully proven in the first place, the punishments levied were very excessive. Ohio State beat Arkansas in the Sugar Bowl a few weeks after 5 of their star players were proven to have blatantly broken NCAA rules on numerous occasions, while those players were still allowed to play. Another recent Heisman winner (hint: rhymes with Scam Tootin') was allegedly not paid to go to an SEC school in Auburn, AL, and was not reprimanded even after it was proven with an audio recording that his father had been demanding close to $200,000 for him to play at Mississippi State...which is illegal whether he received said payments or not. Based off of the punishments given to Tech for a $312 infraction, by my calculations, this should cause Auburn to forfeit 641 wins, leaving them at 77-405-47 all-time (good for a 16% winning percentage). Instead they got a National Title and a Heisman Trophy, because fair is fair right? 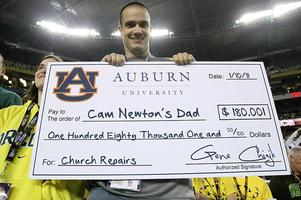 4) The NCAA's Instructions To The Athletic Department Made No Sense

When they received word from the NCAA that they were under investigation for some shady stuff surrounding Thomas and Burnett, Tech was given instructions to not tell the coaches or athletes that they were under investigation. No harm, no foul, right? Well sure, except that it makes no sense as to why they can't know what's going on. Let me clarify what was happening. It was the bye week before the georgie game in 2010. The team was working hard on preparations for the game, and during practice there were a number of players (Thomas, Burnett, Derrick Morgan, Jonathan Dwyer, Cord Howard, and all of Burnett's roommates) were being pulled away during practice for the biggest game of the year to do interviews. Yet nobody was expected to be suspicious or looking for answers? I want to summarize how the NCAA apparently wanted this conversation to go using a quote from our very own Atlanta's original team on the link to the story last week:

President to CPJ: "Sorry, one of your players can’t play in the Georgia game."CPJ: "What? Who are we talking about and why can’t they play?"

President to CPJ: "Let’s just say nobody wearing jersey number 8 can be on the field."CPJ: "Thomas? You’re telling me Thomas can’t play?"

President to CPJ: "There’s an NCAA investigation and I am not allowed to confer with you about this."

CPJ: "Well, what did they say? How am I supposed to handle this?"Athletic Director: "We are not having this conversation."

CPJ: "Damn it all, DRad, tell me what is going on!"Athletic Director: "Look, nobody has done anything wrong yet. It’s all under investigation. However, if I keep talking to you we may have to forfeit any championships or bowls that we win.

Personally, I have no idea why CPJ was so confused in that conversation. Makes clear sense to me. Yup.

(For those who didn't catch on, that was sarcasm.)

5) We Really, Honestly Didn't Think We Were Doing Anything Wrong

This is pretty self-explanatory. Johnson was quoted as saying, "We thought we were cooperating." The fact is, the NCAA was being a pain in their ass, unnecessarily snooping around and providing a distraction as they prepared for a game that half the fan base uses as a gauge for how the season was and whether CPJ should keep his job. It makes good sense that we would be a little less than delighted to have them around. To illustrate how obnoxious they were being, here's a mini-anecdote from Coach Johnson: "They tried to say that [one of our assistant coaches] was directing players to agents. He even asked me if I was directing players to agents. I told him, ‘Dude, I don't even know what you're talking about.'" Also relevant is that our compliance officer and legal advisors told us we weren't doing anything wrong. We had no reason to think that our procedure of handling it would damage the integrity of the NCAA's investigation. We were told by people that (allegedly) knew about stuff like this that we were fine. Does that not count for anything with the NCAA? Because if you ask me, they should have given us a warning and told us to find new advisors and whatnot, but it now looks like they're the friggin' Gestapo, climbin' in our windows, snatchin' our trophies up, and trying to punish us. A governing body that is trying to incriminate rather than assist its members is a pretty awful one, in my opinion.

What's done is done and we can't change that. But regardless of whether the trophy still resides in the Edge Center, and regardless of what Wikipedia says about who won the 2009 ACC Championship, it still happened. I'll remember forever my entire freshman year football season: beating Clemson on Thursday night, storming the field after beating #4 Virginia Tech, and especially watching Derrick Morgan tackle Kyle Parker on 4th and 2 to solidify my Yellow Jackets as ACC Champions. One day I'll tell my grandkids about that, and there's nothing the NCAA can do to stop me.

Thanks for reading this marathon of an article, if you made it this far. What am I wrong about? What did I miss on in the case? Do you think the NCAA got it right? Let me hear your thoughts.