Howdy everyone! as you may know, GT beesball opens up their season in 7 short days, and I'm here to give you a little preview of what hopefully is a championship season! 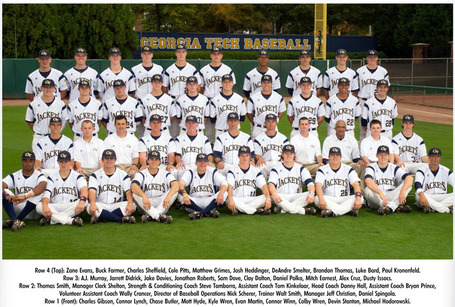 As you may or may not know, we almost always open up the season highly ranked and 2012 is no exception. We're sitting at 10 or 12 depending on who you ask. I'm guessing we would've been higher but we ended last season on a pretty weak note, getting knocked out of the regional that we hosted (again) by Mississippi St. and AUSTIN FREAKING PEAY (what's a Peay, you ask? I don't know, but this here dude is the their mascot, and that's absurd). Anyhoo, this season is shaping up to be another solid jacket squad, lead by Junior P Buck Farmer. With an 11-3 record and 2.91 ERA last season, Farmer is by far our best guy on the hill and will be our Friday starter throughout the season. The next guy in rotation is Matt Grimes, who had a 4.15 ERA and went 7-4 last season. Not bad, but certainly not as good as last season's lockdown combo of Pope, Farmer, and Bradley (Pope and Bradley are playing in A ball and the Arizona Fall League, respectively). Beyond those two, there's no proven knockout guy who's secured himself a spot in the rotation. Coach Hall said himself that "nobody has really stepped up and said 'ok [I'm going to throw the Sunday and midweek games]' and that's kinda what I'm waiting to look for...we're looking for that consistent performance day in and day out." There's a few Freshman in the mix for the job right now, so we'll see how that shakes out. There's also no lefty's in the projected rotation, which could make things strategically interesting for Coach Hall. Most of the team has gotten older, but the pitching staff is relatively young. Overall, the pitching is looking to fill some holes, but we've got the talent to do it.

On the other side of the mound, we should be better defensively this year. Last year we were pretty error prone and that costs us some games, especially in the regional. In 2012, we've got a pretty seasoned team in the infield, and Zane Evans has got a full year behind the plate under his belt. The jackets also FINALLY have some depth at the catcher position, and coach Hall said that will allow him to work Zane into the rotation as a reliever. We're fairly young in the outfield though, with stellar Jr. Brandon Thomas being our only upper classman towards the wall (I'll be our upper classman on top of the wall, but that's besides the point). Overall though, most of this infield and 2/3 of the outfield has been playing together for a year now so that should take quite a chunk out of the "E" column.

Offense is really a toss up. We lost a lot of hitting from '10 to '11 and boy did it show. I think 99.96% of our runs came off HR's or extra base hits last year. We had absolutely zero idea how to play small ball and work the count. I'm blaming lack of experience on this one and hopefully with age comes discipline, but we won't know for sure until Feb. 17th at the Kent St Tournament/season opener. Overall, it looks like our skill sets are the reverse of last year (i.e. lockdown pitch last year with screwy offense and defense, other way around this year) and hopefully an older team leads us to more consistency and smarter choices. So hopefully I'll see you February 24th at the Rusty C. I'll be the guy on the right field wall screaming at "the" Ohio State University's RF about how hot his sister is. Or something.