Now that Championship Week is over, the recruiting action heats up again! In this "open" period, schools have roughly 2 weeks (from the end of the Conference championships to the Christmas break) to bring in recruits for Official Visits (OVs) and hopefully add to the commitment list. After Bowl season, the open period starts again up until National Signing Day (NSD). To help you understand the virtual marketplace that is FBS recruiting, I've put together a Recruiting Primer to help you understand Tech's needs by position, and by year. You've often heard CPJ discuss the challenging of "balancing numbers" in recruiting, and hopefully the following chart will help explain the concept. In the big picture of recruiting, the goal is to have a steady stream of talent at each position so that you don't have gaps in talent or experience.

In the following chart, I've listed Tech players by position and by their last year of eligibility (scholarships given to walk-ons are noted in red in 2012). The 2013 recruiting class is listed in the 2017 column (we assume for now they all redshirt), the 2012 recruiting class that redshirted is in the 2016 column, and so on. This might help you understand where Tech is thin, and at which position they may take additional commits. 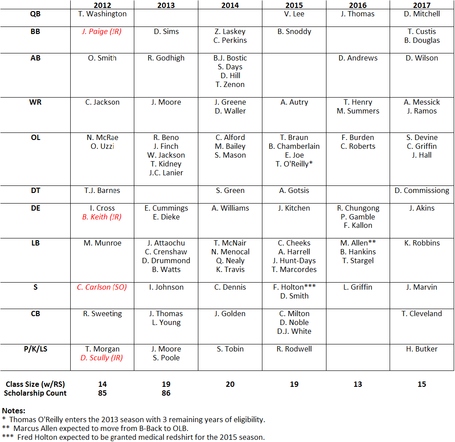 The NCAA mandates that FBS schools are limited to a total scholarship count of 85 at a time. Generally the number of available scholarships for each recruiting class is determined by adding up the net turnover from the previous year. This includes graduating scholarship Seniors, early departures to the NFL, expiring 1-year scholarships given to walk-ons, transfers in/out, players forgoing eligibility because of early graduations (which is quite frequent at Tech), or in the case of DWAG nation...players dismissed from the team for conduct or academics.

In 2012, Tech had 10 Seniors on scholarship and 4 walk-on players earned scholarships...meaning that the 2013 class had a limit of 14 scholarships available. As you can see, Tech is currently sitting at 15 commits for the 2013 class, which most likely means there is at least one player who has confirmed they are not coming back next year. Now, unlike our friends(sic) in the SEC West, Georgia Tech generally turns over a relatively low number of student-athletes year-on-year (usually 3 or less). Some student-athletes have graduated and entered the business world (B.J. Machen, Albert Rocker), while others have graduated and transfered their last year of eligibility to another school (Phil Smith, Daniel McKayhan, Marcus Wright), and some transfer out early.

The reason I go into this much detail is that I think this offseason we will see an abnormally high number of defections (I won't speculate who here...maybe in the comments) and general turnover. Part of it will be due to an impending regime change on the Defensive side of the ball, in which players may be granted releases (if they are not likely to be a fit in the new scheme). Part of it will be Juniors graduating with no real shot of playing in 2013. We may even have an early departure to the NFL. Therefore, we may not even be close to signing our limit for the 2013 recruiting class, and it may not contain the same personnel as it does now.

In upcoming installments, we will look at individual position groups, update information on visits (I am dying to have another discussion about the definition of the team "commitment"), and share other recruiting buzz. For now, I will assume that we retain the 3-4 scheme. Generally speaking, I still think we are light at the DT, A-Back, Safety, and QB. I think it will be an interesting offseason leading up to NSD, to say the least.

What are your thoughts about Tech recruiting??