The Roadmap to Beating Florida State

Florida State has lost twice this year to North Carolina State and Florida, and came close to losing at Virginia Tech. How was it done by those teams, and can Georgia Tech replicate it?

Share All sharing options for: The Roadmap to Beating Florida State

Florida State led this game at halftime by a score of 16-0 before giving up 14 points in the fourth quarter to lose 17-16.

You'll notice here that the 'Noles only converted 20% of their third downs, averaged 3.5 yards per carry, committed 5 penalties for 60 yards, and lost the time of possession battle. Tech's defense isn't great by any stretch of the imagination, but if there's anything they do well (georgia game aside), it's rushing defense, and Tech's showed that it's more than capable of not making mistakes and winning the TOP battle on any given Saturday. The Wolfpack also showed that they were able to not beat themselves (only one turnover and 4 penalties) -- this is a team that pretty much nobody will get away with beating themselves against. The biggest issue will be getting off of the field on third down for the defense, something we've had a really tough time with all year.

Tech's Ability to Replicate: B- 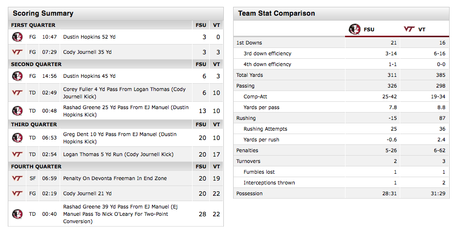 Virginia Tech came back from being down 10 halfway through the third quarter to take a 2-point lead off of a Logan Thomas rushing TD, a safety off of a penalty, and a late field goal. Florida State had an impressive last-minute drive, capped by a 39-yard catch and run for a touchdown by Rashad Greene to save the Seminoles from defeat.

Similar to the last game, Florida State struggled on third down (3 for 14), could not establish the run (they finished with negative 15 yards), and lost the turnover battle, all while playing on the road. They committed only 5 penalties once more in this game, but this time it was for a mere 26 yards. Again you see that a team nearly beat the Seminoles by holding onto the ball and forcing E.J. Manuel to beat them with his arm, and he was only able to do it by the skin of his teeth. The Hokies were unable to win the turnover battle and committed 6 penalties for 62 yards, both big factors in the loss. Notice, though, that their rushing attack was not successful while they were able to find success by using Logan Thomas to throw the ball. 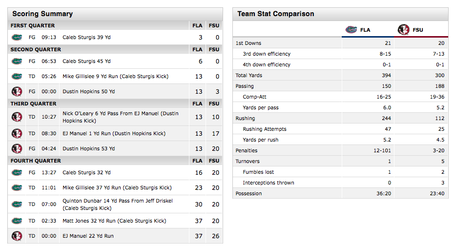 I'll start by once again stating that I have no idea how FSU lost this game, and that they had no business doing so. However, the Seminoles were held scoreless until a first-half-ending field goal, though from there they went on to take a 20-13 lead into the fourth quarter. The Gators' raw athleticism prevailed though, as they scored 24 straight points and won 37-26.

This one shows some similar elements to the other games in that Florida held onto the ball for more time than Florida State did, they limited the Seminoles in the rushing game, forced E.J. Manuel to beat them with his arm, and then forced 5 turnovers (3 INTs). Somehow Florida was able to commit 12 penalties for 101 yards and be leading by 17 going into the last play of the game, but in any case the Gators rode their rushing attack of Jeff Driskel and Mike Gillislee to inflict a lot of damage on Florida State's defense.

Tech's Ability to Replicate: A (outside of penalties)

What does it all mean?

Tech's chances to win this game, based on the blueprint laid for us by those 3 games, will rest on their ability to do the following:

A) Win the Time of Possession and Turnover Battles

B) Slow Down FSU's Rushing Offense and Force E.J. Manuel to Throw a Lot of Passes

C) Get off of the Field on Third Down

E) Not Beat Themselves

Take a look at that list of 5 things, and tell me how many Tech doesn't do regularly. The only one we've had much of an issue with is getting off of the field on third down. I'm starting to like our chances a little more each day. How about you?