ACC and SEC Alum Leading the Way in NFL Playoffs

Share All sharing options for: ACC and SEC Alum Leading the Way in NFL Playoffs

If there were ever a doubt that the Southern football wasn't king, then the 2012 NFL Playoffs should put that rumor to bed. Alum from the ACC and SEC have accounted for 41% of all rushing attempts and 38% of all recepetions in the NFL Playoffs this season. Five of the twelve quarterbacks who threw a pass in the NFL Playoffs played on either an ACC or SEC squad in college. The two conferences are in a dead heat for most touchdowns and total yardage in the NFL Playoffs and it will come down to the Super Bowl to decide which conference's alum group reigns supreme in the 2012 Playoffs: 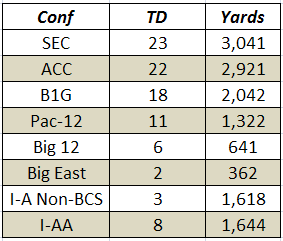 Breaking down the stats by school shows a pretty interesting picture of the playoffs. Drew Brees, Tom Brady, and Eli Manning are leading the way for their schools. Interestingly enough, Miami and Maryland are in the mix for most touchdowns in the Playoffs despite having no starting QB's on any of the NFL Playoff teams. Miami's running backs, receivers, and tight ends had a strong showing in the playoffs as well racking up over 700 yards on 100+ touches.

The final table I compiled was a composite of ACC squads. GT fared pretty well with Will Heller, Calvin Johnson, and Demaryius Thomas. Duke, Wake, and Clemson did not fare so well. 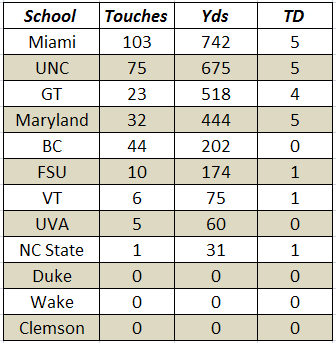