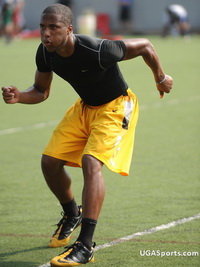 Great news this morning as ATH Travin Henry committed to Tech to play WR. He measured in at 6'4", 228lbs and played both WR and DE in high school at Cook High School in Adele, GA (if he were to play defense for us, he'd project as an OLB with his size). This guy seems to have the perfect body size and the right amount of physicality for what would suit us best at WR. He'll match up great one-on-one with CBs on the outside, between going up to catch passes and blocking in the run game. He's only a 2 star prospect, but before that discourages you, there was another guy who was considered a 2-star prospect and ended up contributing his share at WR for us by the name of Demariyus Thomas (maybe you've heard of him?). He had offers from Vanderbilt, Wake Forest, UAB, Jacksonville State, and Georgia State...but again, before any of that discourages you, remember how good we've seen our coaching staff evaluate talent, getting offers to guys and commitments from them long before other football factories learn about them and go after them. I look forward to having this young man on the Flats and think that he can bring an awful lot to our team.

Here's the highlight tape for him. The moviemaking skills aren't impressive, but he sure looks like quite the athlete.