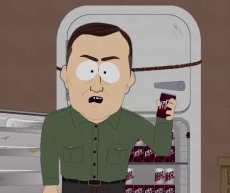 Now before anyone goes and starts getting angry how this involves religion, let me explain myself. I named it this on a reference to South Park, as it seems as though pretty much any question related to our recruiting situation right now must be answered with either "I'm not really sure" or "I have no idea". Seriously, everything is FUBAR, so let me try making some sense of this.

CB Antonio Crawford -- Word is that he's pretty set on taking his visit to Miami. Parents are supposedly not happy about it, but willing to support their son. He reportedly is claiming that, "Miami is like my dream school. I've always wanted to go there. I watched them on TV growing up, know a lot about their tradition, what their football program is always about. I always wanted to play for the University of Miami." I guess CPJ's ultimatum didn't really scare him off. I still refuse to understand this, where Miami already has 31 commitments, 6 of whom are CBs. Why on Earth would you let yourself into a situation like that? Time will tell.

OL Will Adams -- This kid really has no idea what to do. Grew up a Dwags fan, gave them the finger after they paid him no attention until recently, and then was offered a visit by Gene Chizik for this weekend. He's been trying to decide whether or not to go, and was given the same ultimatum by CPJ as others -- go to Auburn, and his scholarship at Tech is not guaranteed. Now it seems that every hour things are changing for him. He spoke with Coach Johnson last night and was scheduled to speak with him again this morning. No idea how this one will turn out.

UPDATE, 10:40am -- After sleeping on it and talking to his folks, he called CPJ to let him know that he will not be visiting Auburn and that he will be signing a LOI for us on Wednesday!

CB Malik Simmons -- Wait, who? Last night word came out that we had a pretty highly-ranked surprise visitor for this weekend. Here it is, UNC Commitment Malik Simmons. Committed to UNC on Halloween and is a 3-star prospect across the board, but is said to have an awful lot of upside. Remember that thing about Crawford apparently not being scared of losing his spot at Tech? Well, looks like he has reason to be. No way of knowing whether Simmons will commit to us or not given an offer, but usually it says a lot that a guy is willing to visit the weekend before National Signing Day.

DT Dalvin Tomlinson -- Still no idea how Saban's visit with the other guy went last night, updates to come when I hear.

As you can see, this situation is a complete and total mess (and really, it is nationally....it's not just happening to us right now). And it could be interpreted a few ways. Other teams are coming in trying to get guys to finish out their recruiting class now that some of their targets have committed elsewhere. I think it means we have really good scouting, and are good at evaluating talent. We've gotten a number of commitments early in the process that later get offers from half of the SEC and Big Ten. That we end up with a lot of guys that other teams want is very encouraging. Hopefully things work out in Tech's favor, but we'll have to see how this weekend goes.

WR Travin Henry -- Visiting us this weekend from Cook County, kid played WR and LB in high school....yes, you read that right. Kid is awfully athletic and can do a lot for us on the outside at WR. Would be a bit of a nightmare to cover for opposing CBs with his 6'3", 213lb frame that will likely only grow here. He may not outrun many corners, but he'll beat them in a few other ways. Also, the hope is that if we get him, Anthony Autry can play CB instead of WR for us (Charles Kelly is much higher on him as a corner than as a receiver). And before you start making fun of his other offers (Georgia State, Jacksonville State and UAB), remember LB Tyler Stargel. When we signed him, he didn't have offers from any other BCS programs. Since signing him, he's been approached by Auburn, among others (luckily for us, he's refused to give them the time of day). I really believe in this staff when it comes to evaluating talent.

(all info credited to Kelly Quinlan and Eric Thompson of JacketsOnline.com)