Share All sharing options for: GT Recruiting has an Interesting Weekend (UPDATED)

The Good News: We're Hosting a Thumper from Down Under 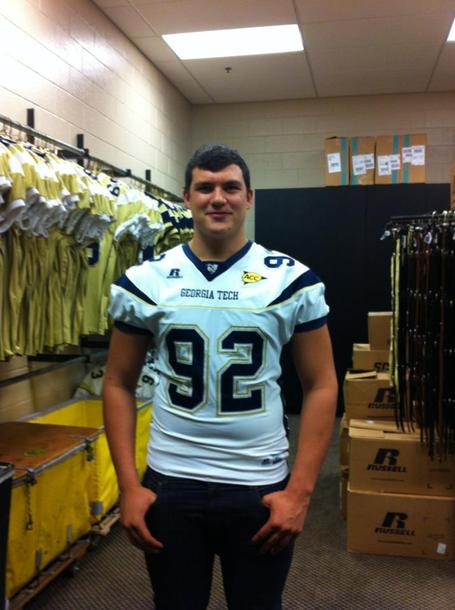 For those who have not yet heard, this weekend Georgia Tech is playing host to a recruit who reigns from Australia. His name is Adam Gotsis. He is 6'5", 295lbs, and carries that weight VERY well. We're recruiting him to play DT. He's 19 years old, and has spent much of his life playing what is known as "Gridiron" in Australia (the sport known as Football here, and American Football everywhere else in the world). Even played on the Australian national team in some tournament I had no idea existed. Kid is very athletic and brings the size we've been looking for in the middle. It's very feasible to think that in a couple years, he could pick up 30lbs (especially given his frame, which has plenty of room for further growth). He has a scholarship offer, and is expected to be commitment #16 by the weekend's end.

UPDATE: As of Sunday morning, Gotsis is officially committed to Tech! Word is that he had been a 'silent commit' for a while (he had committed to the coaches, but hadn't told anyone anything), and has now made it official.

I just heard each of you collectively ask, "Wait, #16? Wasn't that S Lynn Griffin earlier this week?" Which serves as a perfect lead-in to the other half of this article.

The Bad News: We Lost a Commitment

Sad news today out of Lanier County HS, as Tech lost the original commitment of its 2012 class, DE Junior Gnonkonde. Interestingly, this case is not what folks around these parts have come to expect when hearing of a de-commitment -- he is not yet committed anywhere else. Rather, he was dropped because he did not make grades to qualify for Tech's requirements. He qualified by NCAA standards (and is being pursued by USF and Ole Miss now), but is reportedly very upset with the whole situation. He's a talented defensive end who was really excited to play on the Flats from the day that he founded our most recent recruiting class, and it's a shame that he won't ever get the chance to even enroll.

This is just one more example of how trying to field a high-caliber football program at a world-class institution can at times be very difficult, and how the rigor of academics at the Institute is both a blessing and a curse. I wish Junior the very best in the near future.

Further good news from Sunday morning, Georgia Tech offered punter Ryan Rodwell of Deland, FL and got its 17th commitment immediately. We've been looking for special teams help in this recruiting class, and hopefully Rodwell can provide quite a bit of it. Watching his highlight video (featured below), looks as though he can consistently get punts to go 40 yards, with around 4 seconds of hang time. That doesn't make him a Brad Wing per se (that guy has trouble keeping the ball out of the end zone from his own 20 yard line, it seems), but given a little time to develop he should turn into an asset for us on special teams.

(credit to Kelly Quinlan and Eric Thompson of JacketsOnline.com for much of the info contained in this article)