Glen Rice, Jr. plays like a man in victory over NC State

Share All sharing options for: Glen Rice, Jr. plays like a man in victory over NC State

Tech has played the best two games of its season at the onset of ACC play. Tech took Duke to the wire this past weekend and held off an NC State rally in Raleigh. Everyone knew Glen Rice, Jr. was the key cog for this team to succeed after the departures of Brian Oliver and Iman Shumpert but I don't think anyone expected Glen Rice to blow up in back to back ACC games. After averaging only 12.5 points per game in his first 11 games played, Rice has blown up Duke and NC State in back to back efforts averaging 25 points per game. Here's a look at his scoring efficiencies in losses, on the road, and in ACC play compared to the his total season effort: 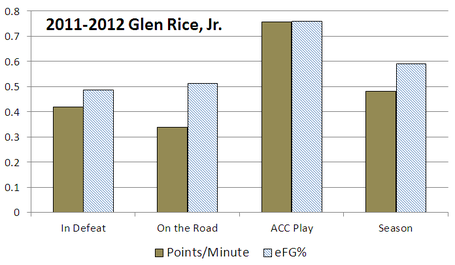 The way Tech has played in its past two games, I can easily see the Jackets knocking off UVA, Clemson, BC, and NC State. The future of this program under Gregory will be determined by how we handle road challenges in College Park, Chapel Hill, and Tallahassee. Any thoughts on last night's win?