In the 2011 NFL playoffs, 5,524 yards of total offense were accumulated in 4 wild card games. Over 72% of that yardage came from BCS conference alums. The SEC alums led all conferences with 1,561 yards of offense in the NFL wild card round. The ACC was second with 1,278. The B1G, Big 12, Pac 10, and Big East combined for 1,150 yards of offense. The top 10 schools based on offensive production are as follows: 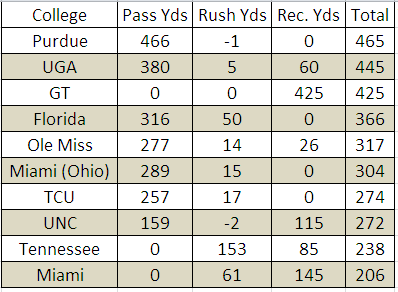 With Matthew Stafford and Calvin Johnson out, the State of Georgia took a major hit in the playoff yardage race. Demaryius Thomas didn't hurt GT, however, with his monster game against the Steelers.

As far as points scored goes, the SEC won again. The SEC has racked up 99 offensive points including offensive touchdowns, PAT's, and FG's. I double counted receiving & passing TD's and I did not count the defensive TD for the Texans or the safety for the Falcons. The ACC was second with 66 points followed by Drew Brees the B1G's 41 points. The top 10 schools based on offensive points scored in the NFL Wildcard round are as follows: 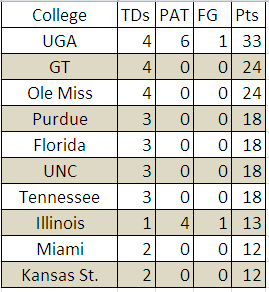 As individuals, Calvin and Demaryius are leading all playoffs receivers with 211 and 204 receiving yards, respectively. The third best is Marques Colston out of Hofstra with 120 yards. Yes, Georgia Tech receivers dominated the first round. All passers were led by Drew Brees and all rushers were led by Arian Foster. The highest point total of the NFL Wildcard round on an individual level was Stafford with 24 points.