The Georgia Tech Yellow Jackets take to the road for the first time in 2011 and for the only time in September. Middle Tennessee, though a member of the Sun Belt, is no slouch and the final stretch meltdown against Purdue remains fresh in their minds. Tech looks to match last year's 42-14 victory over the Blue Raiders in front of 30,000 + screaming crazy blue fans in a place known as The Skillet. 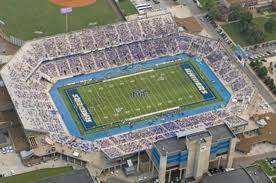 It's so early in the season, if you want to learn more about MTSU, I suggest you check out Bird's post on the Blue Raiders' loss to Purdue last week.

In summary, the Blue Raiders have a new quarterback who is taking over Dwight Dasher, and seem to like to pass more than they did last year. This is likely because Dasher was a dual threat QB and without him, they seem to have little to no rushing game. The Jackets should be able to run through their 3-4 pass defense throughout the day.

Prediction: From my season predictions earlier this year, I envision September as someone easing themselves into a hot bath. Western Carolina is the foot, MTSU is the lower body. We're getting warmer and better, cleaning up the loose ends, ready for the big games in October and November. Jackets take this one.  Georgia Tech covers

What do you think about this weekend's game?