Share All sharing options for: Scheduling I-AA Opponents in the Modern BCS Era

I'm a huge fan of I-AA football. I've followed Georgia Southern and the Southern Conference, in particular, since 2003. The two upsets of I-A squads by I-AA squads got me thinking about the scheduling of I-AA opponents by BCS squads as of late.

First off, I-AA formed a playoff system in 1978. It was originally a four team playoff and it has ballooned to 20 teams. The I-AA Champion will have played 15 games by the end of the season and it's all completely wrapped up before bowls really start. Sounds pretty good already, eh?

The first thing I noticed about scheduling of I-AA's is that BCS teams have started to feign away from two conferences: the Southern and the Colonial Athletic Association. I broke down total games played against these two conferences into 6 years chunks by BCS teams since 1978: 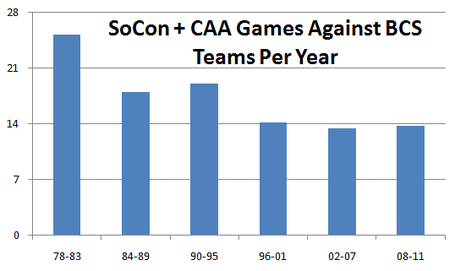 I think that scheduling for wins didn't really become a priority until the BCS became the leviathan that it is today alongside longer schedules. Teams needed punching bags to beat up on not challenges in their home openers that would affect their BCS rankings. Prior to the BCS, teams were allocated bowls based upon their conference affiliation. The beauty contest was there but it wasn't nearly as over-the-top-toddlers-in-tiaras as it is now. Check out the winning percentage of the SoCon and Colonial teams as BCS teams not only dumped their powerhouses but also started scheduling their patsies at a higher clip: 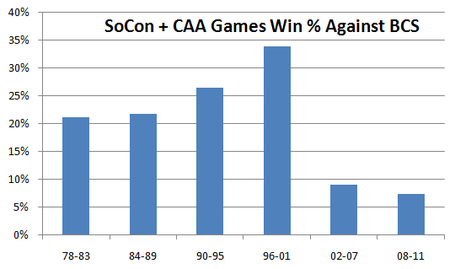