Share All sharing options for: Breaking down Middle Tennessee's Loss to Purdue

We play Middle Tennessee on Saturday so I figured we could breakdown the playcalling and playmakers of Middle Tennessee in their close loss to the Purdue Boilermakers. First, let's compare the 2010 to 2011's season opener in terms of new personnel. The most obvious change is the departure of Dwight Dasher, one of MTSU's most prolific offenders in school history. The Blue Raiders started Logan Kilgore against the Boilermakers. Kilgore started 3 games in 2010 for the Blue Raiders but was eventually re-benched when Dwight came back from suspension.

The Raiders offense averaged 31 passing attempts per game in 2010 and threw the ball on 43% of their playcalls. On Saturday, the Raiders threw the ball 45 times, which was 57% of the playcalls. The Raiders return three of their top five 2010 pass catchers and those three veterans led the way for the Raiders against Purdue's pass defense accounting for 211 receiving yards on 15 catches.

Tavarres Jefferson and Malcolm Beyah are the two names we need to know in their receiving corps and it looks like Beyah is getting a consistent number of plays called his direction while Jefferson appears to be the big play guy. They must have some third down plays designed to use Beyah as a lure to break Jefferson open.

The rushing game wasn't terribly prolific against the Boilermakers. They barely cracked a hundred yards but this isn't terribly surprising considering the Raiders haven't had a true runningback break 1,000 yards in a season since 2002's stellar MTSU stud Dwone Hicks. In fact, the Blue Raiders didn't run one time on third down as their average third down attempt against the Boilermakers was a 3rd and 8. Speaking of play-calling, the Raiders only had two plays in the red zone and both were rushes. 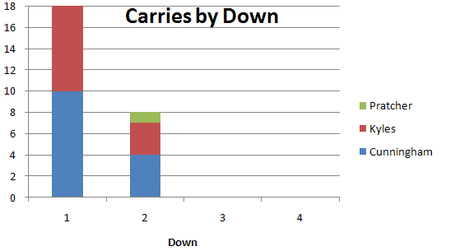 I think Tech fans should look for more of what we saw last season in Atlanta against the Blue Raiders. Except this season we'll be in front of 31,000 screaming Blue Raider fans and the opposing offense will be a little more focused as their starting QB had an entire year plus an offseason to fester over his benching in 2010.