Syracuse and Pittsburgh's Effect on ACC Out of Conference Scheduling

Share All sharing options for: Syracuse and Pittsburgh's Effect on ACC Out of Conference Scheduling

Brian @ BCI pointed out yesterday a big change in the BC schedule. The goal was for BC and Syracuse to develop an end of season rivalry so they had already scheduled games out for over 10+ years. Before the move, Syracuse would've been the third most scheduled BCS team in the ACC's out of conference slate up to 2020 (nine appearances on ACC schedules from 2012-2020). The only teams with more ACC OOC match ups are Georgie (13) and Notre Dame (10). Check out the out of conference scheduling history prior to the Pitt/Syracuse coup: 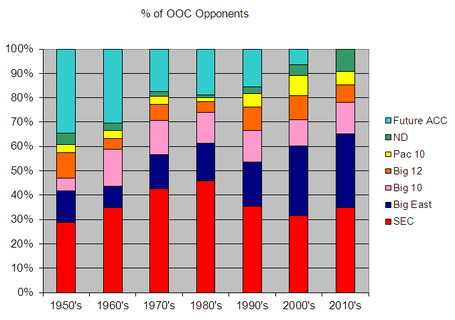 It's amazing to see that almost 50% of the teams that were out of conference opponents for the ACC in the 1950's will be ACC members in the modern post-post-expansion ACC. Pittsburgh affects the graph slightly as they were only slated to play 3 games between now and 2020 against ACC teams but historically Pitt had played a crap ton of old school ACC teams. Pitt also has a pretty good recent history with Miami, VT, and BC. 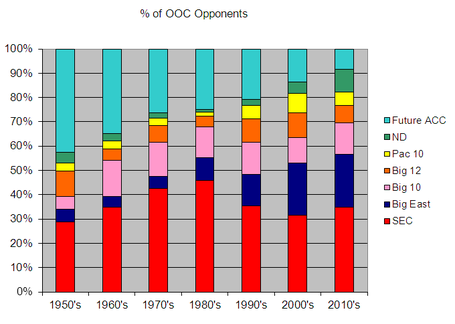 I also find it interesting that SEC has consistently played in 35% of the ACC's OOC games since the 1990's. The two conferences have lived more symbiotically since the 70's. Looking at the way the ACC has played the college football and basketball landscape, I think it was foolhardy to think the SEC or ACC would lose members to eachother. Both conferences appreciate the relationship and don't want to F it up. Hence, the ACC moving Northeast and the SEC moving Southwest. Why retread when you can truly expand?