Share All sharing options for: Georgia Tech Offensive Benchmarks for the 2011 Season

What should the average fan know about Georgia Tech's option offense? What are some common benchmarks per game or per season that this team regularly hits or strives to achieve? Winfield spoke about the quarterback and B-Back already. Acedarney spoke about the secondary. I wanna talk about standards for the team that every fan should look for. Let's talk about baselines first. 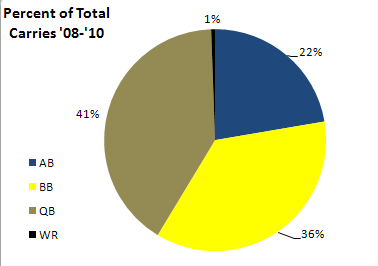 Basically, you should expect the QB to get the call 2 out 5 carries per game. A-Backs get the ball at half that frequency and B-Backs are getting the call about nine times every 36 rushing plays. The other thing a Tech fan or casual CFB fan needs to know about our offense is that Paul Johnson is a patient and sometimes stubborn offensive coordinator. The breakdown of carries based on position in wins/losses shows very little variation to the model:

The only change from a winning effort to a losing effort is that we feature the short yardage B-Back plays less in a loss than we would in a victory. We have seen this before as opponents locked in on A-backs while Tech was trailing through the latter part of 2010.

The other major topic for CPJ's offense is scoring per play. The more plays it takes to get down the field and score a touchdown, the more likely a team is to throw a pick or lose a fumble. Our offense loves eating up the clock but as Winfield showed us, running down the minutes doesn't necessarily equate to victory. Since 2008, it has taken Tech about 20 rushing plays to get a rushing touchdown. The same games for pass plays. Every 20 passing attempts = a passing touchdown. Fans of Hawai'i and Texas Tech should cringe at that stat considering Tech has only passed the ball 12.5 times per game since 2008...

Now, here is the logic behind CPJ's passing:rushing inequality. Tech scores a passing TD every 20 pass plays but we also throw a pick every 20 passing plays. The average opposing drive since 2008 has netted 2.2 points. So all of the work put into every passing touchdown actually only netted us around 4.8 points. This is opposed to our ability to score a rushing TD every 20 plays yet only fumbling every 40 rush attempts. That means for every 14 points we've racked up running the football, we've only given the opponent 2.2 points off of turnovers. Winning by 12 points is much more significant in football than winning by 5.

The average Tech fan probably doesn't want to know how big a difference Tech's rushing attack performs in wins versus losses. It only takes Tech 17 rushing attempts to score a TD in victory. However, in losses Tech needs 36 rushing attempts. Considering we only run 54 times per game, this is fairly paltry. Fumbling is not quite as indicative of a victory. Tech fans don't gasp quite as hard when they see the ball pop out in a CPJ offense. In victory Tech fumbles every 46 rushing attempts as opposed to every 35 rushing attempts in a loss.

If you have any comments or questions, let me know. Any ideas for future posts would be wondrous. 24 days 'til kickoff and 124 days 'til Army-Navy weekend. I hope you're all ready.