Share All sharing options for: Results of the CPJ Era Player Popularity Poll

Last week, we conducted the first ever player popularity poll on FTRS. We asked you who your favorite players were at each position and we received over 150 votes. Considering there were only three years to pull from, some of the races were pure domination and some of the races were unpredictably close. The first two categories I want to share the results of are quarterback and wide receiver. Considering Nesbitt started 34 of the last 40 Georgia Tech football games at quarterback, it's understandable that he was the only QB to receive any votes besides 1 sympathy vote for Jaybo Shaw, the Georgia Southern transfer.

At wide receiver, there wasn't much debate either. Demaryius Thomas caught 85 of the 152 completed passes in 2008 and 2009. He was instrumental in Tech's ACC Title run and accounted for more points per touch than any player in GT's offense since Calvin Johnson. The next group of charts was the more competitive group. There was a lot more divide amongst the fan base on their favorite defensive back even though Morgan Burnett had the most hype, high draft status, and best stats. He only picked up 65% of the vote.

On the offensive line, I always thought Andrew Gardner was a big time fan favorite but Sean Bedford's recent facebook status about the NCAA and his story of ascension as a nerd/walkon/All-ACC player really kind of brought him to the forefront of Tech fandom. 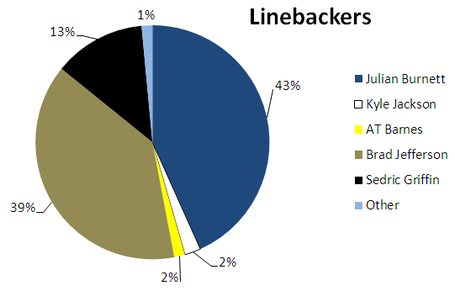 Linebackers was a fuzzy group because no one has really emerged in the CPJ era as a star or stud. I think a lot of voters were picking the guys with the most tackles not necessarily the most popular players. We haven't had a Philip Wheeler or Daryl Smith really emerge from the pack in a while.

The most anticipated groups and most debated will probably be the runningback and defensive line. Running backs was a three horse race between Roddy, Dwyer, and Anthony Allen. We had some Lucas "Lou Holtz" Cox sprinkled in the results as well. Dwyer took the cake, literally... He racked up the votes.

Michael Johnson vs. Derrick Morgan was a great contest. Derrick took an early lead but faded as the night progressed. I think Michael Johnson had more iconic Tech moments ('08 Whiteout versus Miami, '06 goalline stand versus Maryland). Derrick is a great player rep for the Institute but MJ the Destroyer had a few more highlights that Tech fans can remember vividly.

The Oscar for Best Actor went to Joshua Nesbitt by a wide margin. There were a few competitors in Dwyer, Bedford, and Demaryius Thomas but even then they all three combined had fewer votes than the Warrior. Here's the breakdown:

Honorable mentions go out to interesting write-ins including George P. Burdell, Josh F'n Nesbitt, Coach Paul Johnson, and Marcus Wright aka the War Ooompa Loompa. As a testament to Nesbitt's warior tenacity, one ballot had all categories blank and "Josh Nesbitt" as the best running back in the CPJ era. Any thoughts on the results? Any surprises? Any predictions for new heroes amongst the Old Gold and White on this year's squad?