4th Year is the Critical Year For Paul Johnson

Share All sharing options for: 4th Year is the Critical Year For Paul Johnson

Paul Johnson has accumulated more conference wins than any other program in the ACC behind only Virginia Tech since 2008. He has won more ACC games in his first three seasons than any other Georgia Tech head coach ever. He is also entering the critical fourth year of his tenure. 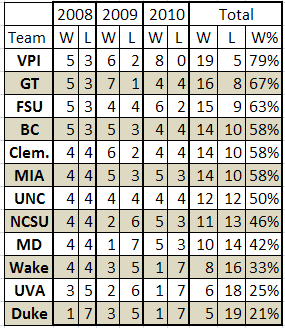 Paul Johnson has a few remnants of Chan Gailey's 2006 recruits left. There are five Gailey guys left to be exact: Logan Walls, Roddy Jones, Jason Peters, Michael Peterson, & Chandler Anderson. I'm pretty positive, however, the Gailey influence is all but non-existent on this team now. So, what should Tech fans expect from an almost pure Paul Johnson squad? 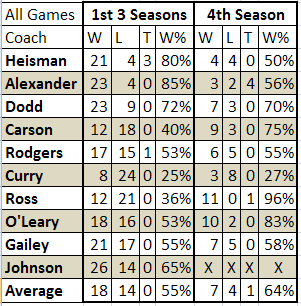 Historically, Georgia Tech coaches have increased their overall winning percentage by 10% in their fourth year of coaching (from 55% to 64%). The only coaches who failed to improve upon their first three seasons were legends Heisman, Alexander, and Dodd. All modern era GT coaches typically saw a drastic improvement as opposed to their contemporaries. In ACC play, it appears the 4th year is the golden year: 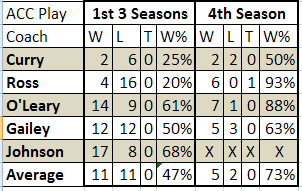 Any thoughts out there as to why Georgia Tech seems to shine during a coach's fourth year? Any questions or random comments? Is life giving you limes or lemons?