Share All sharing options for: Friday Random 10 - Brought To You By Georgia Tech And The Space Shuttle

Today brings the end of an era in space exploration and in the words of the Atlanta-Journal Constitution, The last mission of the space shuttle program will mirror its first: a Georgia Institute of Technology graduate will be aboard the spacecraft. 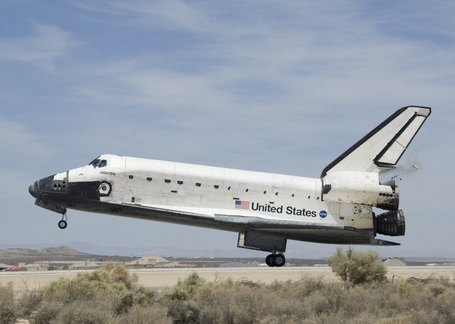 This final launch of the space shuttle is momentous for all Americans, and it is especially meaningful for us at Tech. There are 14 Georgia Tech graduates who have flown on the shuttle and a huge number of engineers and scientists who have helped to make the U.S. space program successful. Hundreds, and perhaps thousands, of Georgia Tech alumni have worked for NASA over the years as researchers, engineers and administrators, including about 150 full-time engineers and co-ops currently employed today at facilities such as the Johnson, Kennedy and Marshall Space Flight Centers. Nearly one-third of the research conducted by faculty in our School of Aerospace Engineering is supported by NASA.

So for today, here are a special 5 space songs.

4. THE ENTIRE ALBUM OF DARK SIDE OF THE MOON - PINK FLOYD

Who do you have as your top space exploration songs? What's your Random 10 playlist?