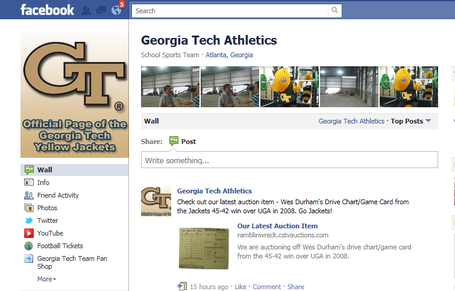 The website SportsFanGraph tracks Twitter followers and Facebook "Likes" for different college programs and athletic conferences.  Georgia Tech is ranked 55th overall, right below the darned Big East Conference. According to SportsFanGraph, Tech currently sits at 8,655 twitter followers and 18,698 Likes. There are only 15 schools that have more twitter followers than the Institute. The issue is facebook where we only have 18,698 likes.The social networking site that almost everyone is on these days is where we strongly lag behind schools such as Army (30,292), Nevada (30,899), and North Dakota (42,718). Maybe all the Techies have moved on to Google+ by now.

Fortunately this little problem can be fixed very quickly simply by heading over to the Georgia Tech social sites. 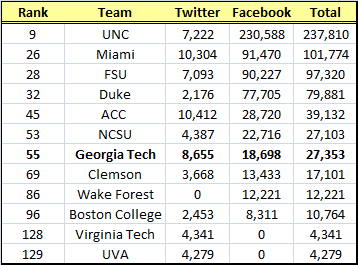 Surely, we can set a goal to pass NCSU.

HT: BCI, where I found this initially

HTT: TNIAAM, a leader of social networking and blogging.