Share All sharing options for: NCAA Basketball Conferences 2010-2011 Out of Conference Performance

Before I fill out a bracket, I like to break down the performances of each conference against one another. I like to see teams that challeneged themselves in the regular season with a good, solid OOC schedule. This typically means a healthy dose of Big 6 teams (ACC, Big 10, Big 12, Pac 10, SEC, or Big East). In the 2010-2011 season, Big 6 schools played 725 out of conference games against non-Big 6 schools. The Big 6 schools won all but 120 of those games (83% winning percentage). So judging a team on its non-Big 6 wins can be a little shakey. Fortunately for America, Wake Forest and LSU are not gonna make the NCAA Tournament. They both played 14 non-Big 6 schools during their OOC schedule. Conversely, some schools almost played themselves out of the tournament loading up on Big 6 schools. Texas, Kentucky, and Virginia played the most Big 6 OOC opponents at 7 in the 2010-2011 season.

For me, I like to look at conferences as a whole because I don't have time to break down every team's resume right before March Madness. So let's look at what conference sought the toughest road to March first. Check out the following chart:

The Big East has had a stellar season but did they really challenge themselves out of conference like they should have? The Big East played 50% more midmajors per Big 6 opponent during their OOC conference slate than the ACC. Are we foreshadowing another March Madness flop for the Big East ala 2010? I don't think so. And the reasoning is below:

The Big East has flat out kicked ass in Big 6 play this season. Only the Big 12 and Big East have above .500 records against the combined Big 6 conferences and the Big East is the only conference with above .500 records against each of the Big 6 conferences. Also, there were nine schools that went undefeated in Big 6 out of conference play. The schools were Syracuse, Cincinnati, UConn, Ohio State, Kansas, Georgetown, St. John's, Wake Forest, and South Florida. Six out of the sixteen Big East schools took down the meat of their schedule with authority. 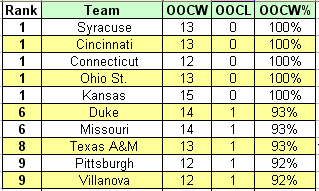 Concerning other conferences, I'd say the Big 12 and ACC are neck in neck a few steps behind the Big East. Personally, I don't think ACC fans should have too much to worry about. The ACC challenged itself regularly as the conference played the most Big 6 opponents in OOC play (51) and had 40% or better records against every conference in America. I don't think it's a stretch to say that the ACC should expect a Final 4 team.

The bottom of the barrel in the 2010-2011 season was easily the Pac 10. They didn't challenge any other conferences playing in only 31 Big 6 OOC games. They had the worst winning percentage of all the Big 6 conferences in OOC Big 6 play. In fact, their 57% winning perctage over the ACC didn't appear to be very significant in that the Pac 10 only won 4 out of 7 total games played. The Pac 10's expansion makes even more sense if you look at their total OOC opponents played in hoops: ACC (7), Big 10 (1), Big 12 (16), Big East (4), and SEC (2). Extending a conference footprint, to me, will encourage more/better OOC play.

Do you have any thoughts or questions?