Share All sharing options for: ACC Hoops: The NCAA Tournament Pre and Post-Expansion

Let's talk about BC Interruption, Gobbler Country, and random convicts on South Beach. The two aforementioned characters really dislike being referred to as "outsiders" considering they've been in the conference for half a decade already. But let's be honest, Post-Expansion gives us a great "Modern Era" to draw data from in order to draw incredibly wide sweeping conclusions. And this is all based completely on loosely strung together inputs but I don't care. Let's dive in.

In the Post-Expansion Era's defense, the ACC has won 3 titles since 2005 as opposed to only two the previous six seasons. However, the ACC averaged a team in the Final 4 before expansion while Post-Expansion has averaged 43% less Final 4 teams. Check out the breakdown based on Total ACC teams: 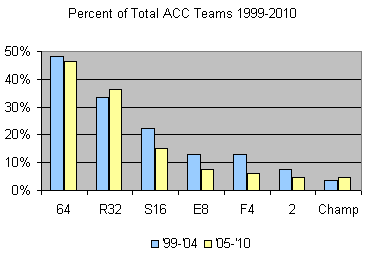 The only other factor we need to look at is pre-NCAA hype. Seeding is directly correlated to winning in the NCAA Tournament. The average ACC team from 1998-2004 averaged a 4 seed while the average ACC team from 2005-2011 has averaged a 5 seed. In the two aforementioned timespans, the ACC only had 1 double digit seed in Pre-Expansion while the Post-Expansion ACC has racked up 7 double digit seeds. In fact, the Old 9 was very underrated during its 6 year prior to Expansion. The expected winning percentage of the Old 9 from 1999-2004 was only 61% but the Old 9 racked up a 69% winning percentage in tourney play. The Post-Expansion ACC has been slightly overrated as the teams were expected to win 65% of their games from 2005-2010 but only won 62%. This isn't as bad as it looks as the ACC outperformed or met expected results in every Post-Expansion season besides 2007 and 2008. 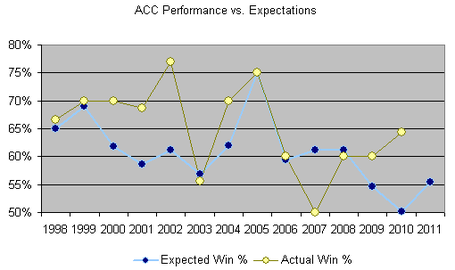