The Georgia Tech Yellow Jackets face the Virginia Tech Hokies in the first round of the ACC Tournament in a battle of 1) vs. 6-seed (VT) tonight around 9:30PM. The winner will face the 4-seed, Florida State Seminoles, Friday. Instead of trying to get in-depth about iffy basketball, we look at the historical history of Georgia Tech and the ACC Tournament. We hope you enjoy it. 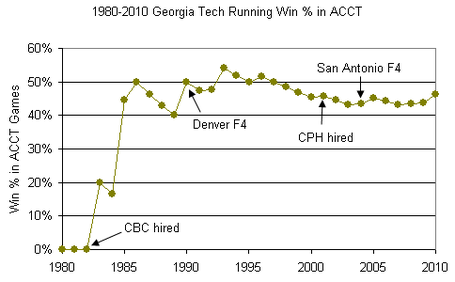 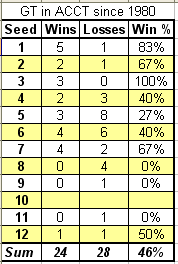 Tech enters the 2011 Tournament as the 11th seeded team. Tech has a 1-7 record all-time going into the Tournament with an 8 seed or worse. Expectations are low and any victories will be incredibly sweet for this squad.

Here's what you need to know for the game tonight. The Jackets beat Virginia Tech by 15. The squads then switched roles and the Hokes dominated the game and won by 25. The Hokies sit squarely on the bubble and NEED this win. How do you think Tech will fare in the first round against VT and a possible second round match up with FSU? Can the Jackets play Bubble Buster?