Share All sharing options for: Georgia Tech Baseball: Danny Hall versus the ACC

Jesse28 brought up a great point yesterday. He basically stated that Danny Hall always finds a way. If you don't believe that, then check out his running win percentage against the 11 other ACC schools. He's only sub-500 against Miami and Clemson. The Clemson disparity is shrinking as well. The next step is to check out his record against ACC coaches. 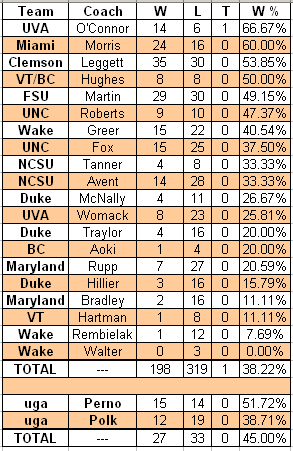 Only a few guys have winning records against Hall since he started at Tech. Jack Leggett has beaten Danny Hall 11 of 21 meetings in the last 5 years. Leggett literally is the Bizzarro Danny Hall. Every Tech Beesball fan knows Jim Morris. Considering his predecessor was 8-23 against Danny Hall, UVA's Brian O'Connor has really turned the corner with a once foundering UVA program.

This season Hall will face Maryland, NC State, Miami, Duke, UVA, Wake, Boston College, Clemson, UNC, and VT. We'll miss out on improving our winning percentage against FSU as they've dodged the Danny Hall bullet for the second year in a row.