I wish I had some good news for the ailing Georgia Tech basketball fan but unfortunately I'm about to lay out some potentially disappointing news. First, the goods news. Georgia Tech baseball starts in 10 days. We're hosting Kent State. The bad news is that our infield will be missing the experience of 6 primary starters from 2010's NCAAT team. In fact, we graduated over 72% of the infield starts from 2010. And since an infield is also the offense, we lost 71% of our total at bats, 79% of our home runs, and 75% of our RBI to graduation. This is a pretty tough spot to put an offense-oriented Danny Hall squad in. 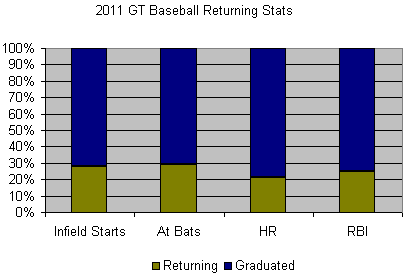 Fortunately for Hall, we do return some arms in 2011. Mark Pope, Jed Bradley, and Buck Farmer played in a ton of games last year. The depth of 2010's pitching staff made mince meat out of our midweek opponents. In fact, Tech was 12-1 against midweek opponents in 2010 with the lone loss being against Kennesaw State. Tech returns 50% of its 2010 starts, 38% of its saves, 57% of its innings pitched, and 58% of its strikeouts. 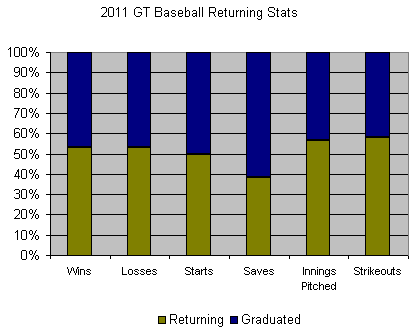 I have a feeling we're gonna look more like a UNC squad than a GT squad in 2011. GT scored 10 or more runs in 24 of its games in 2010. Prepare for that number to decrease in 2011. Any thoughts out there from the diehard Beesball fans?