In regards to free-throw shooting, Yellow Jacket opponents are attempting an average of 4 more shots per game. In conference, that number balloons to 9.5 more shots per game. Free points = greater potential for an easy victory. Plus, losing at the end leads to more FT attempts.  Only twice have the Jackets out shot their opponent at the line and lost the game (Kennesaw State and Miami) and only twice have the Jackets been out shot by their opponent and won the game (North Carolina and Niagara). Below is the breakdown. What are your thoughts? 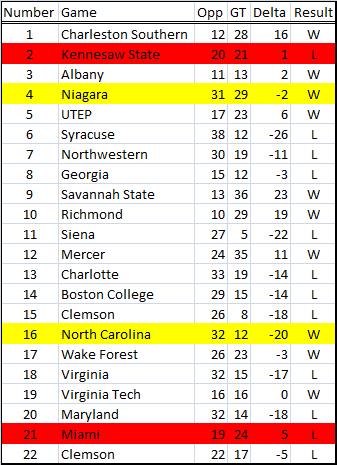 And here's a graph for more visuals.