The Paul Hewitt Era By The Numbers: Part IV

Share All sharing options for: The Paul Hewitt Era By The Numbers: Part IV

Note: Originally written by Bird. Due to National Signing Day news, I had to move his story back a bit. All stats up to 2/1/2011.

Last year, I ran a series of posts comparing Hewitt to his ACC and NCAA contemporaries. I'm reviving the series today in an effort to show fans around the NCAA why Hewitt frustrates the Hell out of Georgia Tech fans. First off, let's talk about Hewitt's 2004 run. It predicates every comparison between Hewitt and other coaches because so few coaches make it to the Final 4. In fact, there have only been 26 different schools in the Final 4 since 2001. Only 8 of those 26 have been multiple times during Hewitt's tenure (Duke, UNC, Maryland, UConn, Michigan State, Kansas, UCLA, and Florida). If we were to rank the Final 4 appearance teams based on their performance in tournaments from 2001-2010, we'd see the following chart: 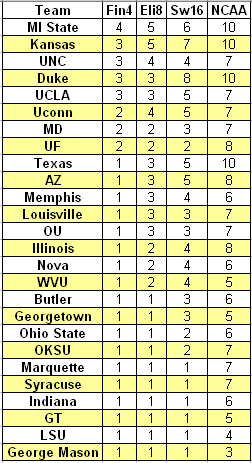 Hewitt's lone Final 4 run puts GT in the 24th best position concerning Final 4 teams. Sure, there are a ton of squads that have made the Dance more times but that Final 4 banner certainly makes up for a lot of shortcomings. The problem is that when you look around at the other Final 4 teams, you see more consistency. The average Final 4 school in the Paul Hewitt Era has been to 2 Elite 8's, 3 Sweet 16's, and 7 NCAA tournaments. So a good question to ask would be, do we belong amongst this group of 26 programs because we made one run to the Final 4?

Where Paul Hewitt gains ground, however, is in comparing his resume to conference foes. ACC fans may have a heart attack when they realize that only Maryland, Duke, UNC, and GT have made it to the Elite 8 since 2001. GT is actually tied for sixth in the conference in number of NCAA bids as well at 5. Here's the NCAAT breakdown in a similar format to the above chart: 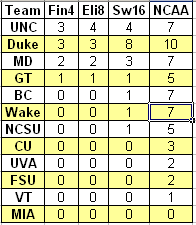 The point that I harp on perhaps the most that is a negative for Hewitt is that he has a tendency to understate the importance of the regular season. GT has a 41.9% winning percentage in ACC regular season play since the 2000-2001 season. This is good enough for 8th best in the conference (a tie with Florida State FYI). We are only better than UVA, Clemson, and Miami. 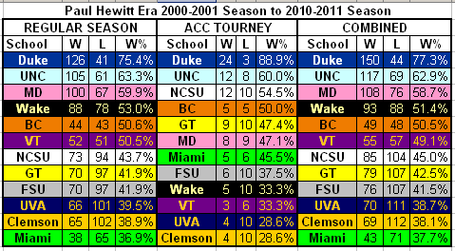 Please note two things: 1) I used a lot of colors in this chart 2) GT performs fairly well in the ACCT for a non-North Carolina school. If we were to break everything down by coaches, some of the information comes out better for Hewitt and some is worse... 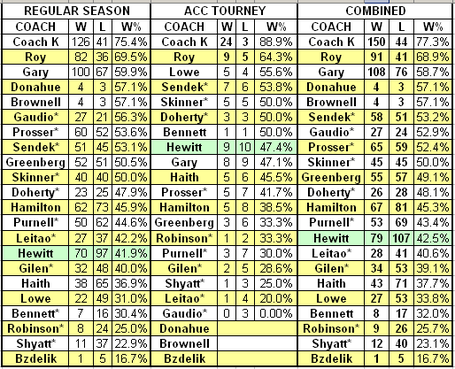 Note: The *asterisk means the coach is inactive in the ACC. Hewitt turns out to be the 8th best overall winning percentage amongst active ACC coaches. This could change a little by season's end as Brownell, Donahue, and Bzdelik are still accumulating wins/losses. The bonus for Hewitt is that he is actually not too bad in the ACC Tourney. Outside of Tobacco Road, he's got the best ACCT record of any active coach that has coached in it multiple years.

Do you have any comments or questions?