What do Tony Akins, Jarrett Jack, Javaris Crittenton, Zam Fredrick, Matt Causey, and Mfon Udofia all have in common? They're all point guards that didn't or haven't played in Paul Hewitt's system for four full years like Mario West, D'Andre Bell, and current team member Maurice Miller. The nature of modern college hoops means that even a key position like point guard still has major turnover. Only 3 out of 7 possible point guards survived four years at our fine university (excluding Mfon and Tony). The other 4 were transfers or early departures. It's rare to see a player mature over four years in college basketball (particularly in CPH's program) and we're happy to see a point guard like Mo Miller make it through the gauntlet of 4 ACC seasons.

I'm proud to say that we've watched Maurice Miller in Hewitt's system the past four years. He's brought a steady, veteran hand to the starting lineup on occasion and particularly to the bench since his arrival at Georgia Tech. Miller has played in 112 career games at Georgia Tech including 57 career starts. This puts him as the 9th most experienced player in Hewitt's tenure in terms of games played since the 2000-2001 season. His 57 career starts puts him at the 13th most career starts during CPH's tenure. If we can manage a victory in the ACCT, Mo will jump to 11th most career starts under CPH. Miller's 2,201 career minutes makes him Hewitt's tenth most tested played since Hewitt has been at Tech. Here's a breakdown of the top 15 players in terms of games played in, games started, and minutes played since the 2000-2001 season: 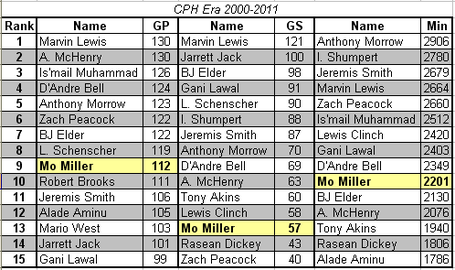 I bet you didn't realize how vital Maurice has been to Tech's scheme since his arrival. His simple "time on the floor" stats aren't nearly as impressive as his actual point guard related stats. Maurice Miller owns the sixth best Assist:Turnover ratio amongst all Georgia Tech players from 2000-2011. Mo also has the sixth most steals and sixth best free throw shooting percentage of all Tech players since the 2000-2001 season. 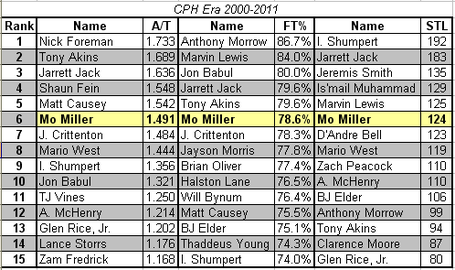 Now, any joker can amass a ton of stats if he plays in a bunch of games. That's not what I want to point out because Mo actually has proven to be quite efficient for Tech during his tenure. Out of the 52 different players I pulled career data from, Mo Miller scored the 16th most points per field goal attempt and had the 6th most assists per minute. He actually has the second most assists per field goal attempts for all Tech players under Hewitt (aka he plays selfless rather than selfish). Paco Diaw is the only guy above him and Paco played garbage time only.

So cheers to Maurice Miller as he plays his final 3 (at least) games of his college career at Georgia Tech. He will not go quietly into the annals of Georgia Tech basketball lore. We will remember you at From the Rumble Seat for your hard work and dedication to the program. Have one on us after you play your final game in the Thrillerdome. Go Jackets! Give 'em Hell Mo!

PLAY THE MARCH TO THE CHAMPIONSHIP GAME
AND YOU COULD WIN A TRIP FOR TWO TO LAS VEGAS!