If you follow Georgia Tech athletics year-round, you would have noticed there were quite a few activities taking place this past weekend. Baseball season started in glorious fashion and the weather played along as well. Basketball continued at its sad,normal pace and various non-revenue sports teams competed as well. Here are the highlights of what you missed.

The Yellow Jackets won the first series of the 2011 season against the Kent State Golden Flashes 2 games to 1. Georgia Tech won the Friday and Saturday games 6-3 and 8-1 respectively. The Yellow Jackets won by slapping the ball around and generating base hits (25 in 2 games) rather than relying on pure power. Unfortunately, Kent State shut said bats down and stole the third game 6-1 Sunday afternoon holding the Jackets to only 5-hits. Tech saw solid starting pitching performances by all of its pitchers over the weekend in Mark Pope (Friday: 6.2 IP, 5 H, 6 K's, ER), Jed Bradley (Saturday: 5.2 IP, 4 H, 10 K's, 1ER), and Buck Farmer (Sunday: 5 IP, 4 H, 6 K's, 0 ER). Jacob Esch led the offense going 7-12 over the weekend which included 4 doubles.

While the bats seemed to have gone cold on Sunday, the game was attended by quite the celebrity (in a Tech man's eyes at least)  Bill Nye the Science Guy was on hand to not only throw out the pitch but to also do some play-by-play in the booth. Video and audio soon forthcoming... 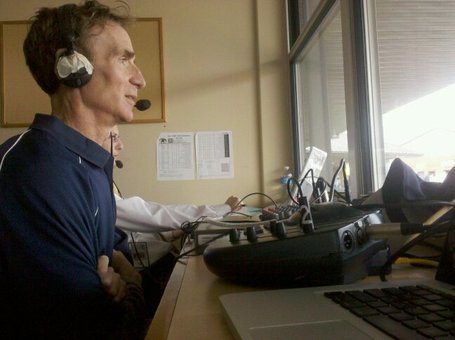 The Jackets will travel to Georgia Southern for a 2-game series February 22 and 23 and will return to Russ Chandler this weekend to host St. John's for the weekend.

The Yellow Jackets were defeated last night by the Duke Blue Devils 79-57. Tech has now dropped its 6th straight ACC game. HYPNOFACE took full effect as this time the Paul Hewitt stare down infuriated Coach Kryzaeiswkeuitski so much that he got called for a technical foul. However in typical HYPNOFACE fashion, Duke outscored Georgia Tech 54-22 66-39 after Coach K's technical. Iman Shumpert and Mo Miller each had 13 points for Tech.

While football, basketball and baseball hog the spotlight, other Tech athletes are succeeding on the field as well.

Swimming: The ACC Swimming and Diving Championships are being held at Georgia Tech this year. The weekend saw 3 Men's Diving Records broken by the Men's team and the girls swim team broke 4 school records as well. Men's swimming competition begins this week.

Softball: Georgia Tech lost a time-shortened game to Florida International University on Sunday 6-5 in the Felsburg Memorial Tournament held in Miami, FL. The loss puts the Jackets at 7-3 overall. We all miss Jen Yee.

Tennis: Both the men's and women's tennis teams took victories away from Auburn and Washington respectively. The men's team has now put together a 5 series winning streak which includes beating in-state rival georgia (rarely happens folks).