The Kent State Golden Flashes come to Atlanta for a 3-day weekend series against the Georgia Tech Yellow Jackets to start off the 2011 baseball season. Kent State is now in their 96th season of baseball and is projected to be the MAC Conference Champions.

In 2010 the Flashes went 39-25, won the MAC Tournament and made their 2nd consecutive NCAA Tournament appearance (Los Angeles Regional). On paper, Kent State seems to bring a little more power and skill than most of the northern teams that have come down to Atlanta in the past.

The Georgia Tech dugout will have a familiar look to Kent State baseball fans. Former Flashes skipper Danny Hall enters his 18th season at the helm of the Yellow Jackets. Before being named head coach of the Ramblin' Wreck in 1994, Hall compiled a 208-117 (.640) record in six seasons (1988-93) as the leader of Kent State. The Golden Flashes made back-to-back trips to the NCAA Tournament under Hall's watch in '92 and '93. At catcher for those Kent State teams? None other than current Kent State head coach Scott Stricklin, who went on to become an assistant coach/recruiting coordinator on Hall's GT coaching staff from 2002-04 before taking his current post at his Alma mater. Beginning his first year as a volunteer assistant coach for the Yellow Jackets is Rick Rembielak, who succeeded Hall and preceded Stricklin as Kent State's head coach. In 11 seasons (1994-2004), Rembielak recorded a 373-251-1 (.598) mark as skipper of the Golden Flashes and guided Kent State to the NCAA Tournament four times. Between Stricklin, Hall and Rembielak, Russ Chandler Stadium will be home to men who won a combined 803 games and 16 MAC championships during their tenures as leaders of the Kent State baseball program this weekend.

This weekend's game can be heard live on Wrek Radio 91.1 FM. Gametimes are 4pm (Friday) 2pm (Saturday) and 1pm (Sunday).

Georgia Tech baseball is fun and affordable event for all and is played at Russ Chandler Stadium on the Georgia Tech Campus. 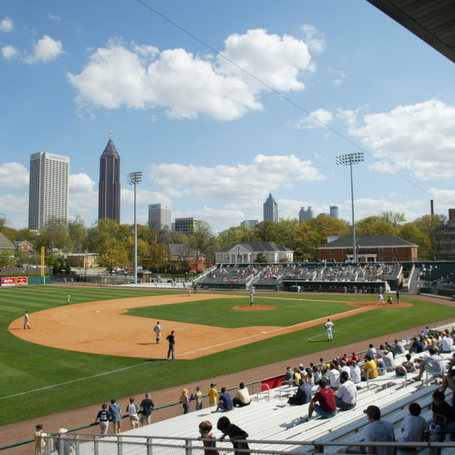