Georgia Tech 2011 Football Schedule: How Will The Opponents Prepare?

Share All sharing options for: Georgia Tech 2011 Football Schedule: How Will The Opponents Prepare?

The ACC college football schedule for 2011 was released Tuesday and suddenly the football blogs have things to talk about. While many can complain about how the schedule helps other teams (I'm speaking to you FSU fans) others just want an excuse to talk football again. A great read rant about ACC scheduling was written by Bud Elliott of Tomahawk Nation Tuesday. He proposes following the structure of the SEC and solidify a "conference season." Yes, please let's do this!

Moving on...if we want to break down the season, let's break it down into chunks. Let's look at who do the Georgia Tech opponents play before they take on the Yellow Jackets and after. Because of our unique offense, let's be sure look for teams that have bye weeks before they take on Tech. 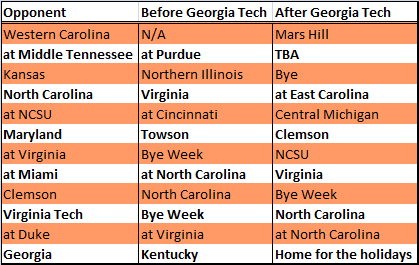 Two teams have the week off before they take on Georgia Tech. Looking beyond the Catamounts who we start the season off with, we see that it is Virginia Tech and Virginia that have an off week the week before. Natural instinct says to ignore the Cavaliers and to worry about that extra week of rest and preparation the Hokies will receive as our games are continuously deciding who will be the eventual Coastal Division champion. Overall I am OK with how the schedule worked out for us. Last year there were three legitimate teams who had more rest than us going into the game. This year, two, and really only one needs to be considered.

I like the planning of our schedule. The bye week come before the Thursday night game against Virginia Tech which gives us 10 days of rest and preparation. Duke, our usual ACC cupcake, comes before georgie.

Only once do the Jackets have to play in back-to-back road games (at Virginia and at Miami). This set up can be good for us. Two seasons ago, the ridiculous month of October (only one home game in the entire span) exhausted those who traveled to the games.