Congratulations to Iman Shumpert as he scored his 1,000th point for Georgia Tech basketball!

Georgia Tech basketball and scoring droughts go hand-in-hand like bread and butter this season. For the second straight game the Yellow Jackets suffered such a drought that allowed the opponent to gain a considerable lead and never look back. Against Clemson this past Saturday the Tigers went on a 22-0 run. Tonight the Jackets went almost seven straight minutes without scoring! This included 11 straight missed shots and five turnovers. You cannot win a basketball game in this manner. 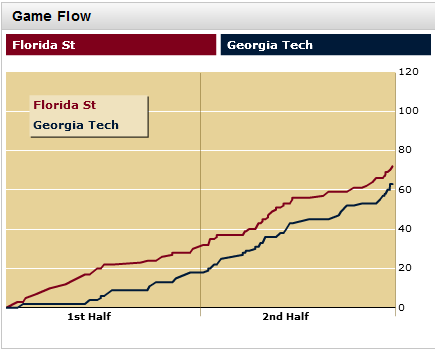 Leonard Hamilton has owned Paul Hewitt recently. Florida State has now won six straight games against Georgia Tech, and 7 of the past 9. The last time Hewitt notched a win against the Seminoles was the 2006-2007 season where he won both match-ups.

In basketball, one can argue that one player makes all the difference. However, all five on the floor need to contribute in some manner. The 2011 season might as well be the Iman Shumpert and Glen Rice Jr Yellow Jackets as they are the only two individuals producing on the court. The two combined for 49 points (25 and 24 respectively)against the Seminoles. Against Miami last week, they were literally the only two starters that even scored points.

Georgia Tech falls to 10-13 overall (3-7 ACC) and Florida State improves to 17-7 (7-3 ACC). The Jackets next game will be in Blacksburg, VA as they will play the Virginia Tech Hokies on Sunday February 13.