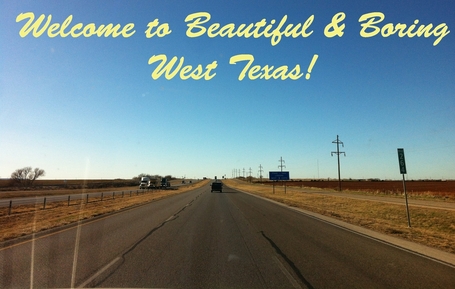 *actual view from the truck cab for about 500 miles

"That thing got reverse?!"

"May all your problems be little ones, but don’t name them after me"

Hello everyone, to update you on our progress, we’re writing this from the cab of the Ramblin’ Reck Truck as the scenery cacti of West Texas go passing by. We have been warned about the vastness and emptiness of this trip by several people, but to actually experience it is mind boggling. For example, we started to run low on fuel and began looking for a Diesel station, it took us 30 miles to fill up. Another example of the extremes we’re encountering is our MPG has now dropped from 10.2 in east Texas to 8.2 in west Texas, which is due entirely to the crazy wind that we’re encountering.

Last night we had the great fortunes of staying with alumni Dan and Tami Schinedling at their beautiful home in Keller, Texas which is a northern suburb of Dallas. We met up with Dan outside of the home of another alumnus, Brad Urey who graduated in 1946 in Electrical Engineering with a Co-Op. Unfortunately Brad wasn’t able to come to the party that we were planning for later that evening, due to some recent surgery, so we decided to make a surprise visit. 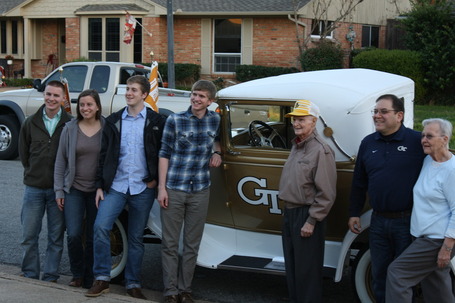 All of the Reck Club travelers with Dan and Mr and Mrs. Urey.

After a quick ride around the neighborhood, we loaded the Reck back into the trailer and Dan escorted us to his home in Keller.

As Mike drove the Reck towards the Schinedling house, a crowd of cheers erupted, and cameras started flashing continuously. We were surprised at the professional set up for picture taking, and we are sure that many family Christmas card pictures were taken for the next year. It was during this chaos of bright lights that we realized that Stephen had locked the keys to the trailer inside. All is well though, as we put our engineering skills to good use, and broke in to our own vehicle. 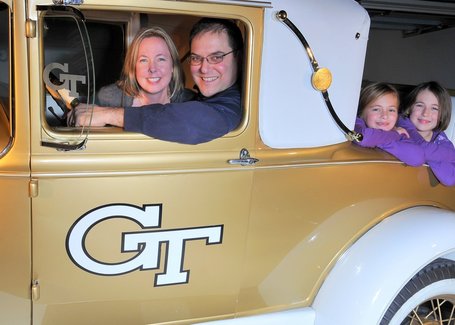 Schneidling family in the Ramblin' Reck

After figuring out the key situation, we were finally able to take in the warmth of all the guests that had shown up to see us and support the Reck. It was an impressive showing by the Georgia Tech Dallas/Fort Worth Alumni Club as they welcomed us with smoked turkey, homemade goods, wine, beer, and many questions and excitement about the Reck. We shared many stories about the college years, some recent, and some that had probably been shared many times before.

When the party finally died down, we ended up sleeping in several rooms upstairs, including taking over the Schinedling daughters’ room. Stephen and John found themselves spending the night with several stuffed animals and American Girl dolls, the former making Stephen feel very much at home. Mike slept on the couch, but it wasn’t the end of the world. He still got a pseudo-good night’s sleep. 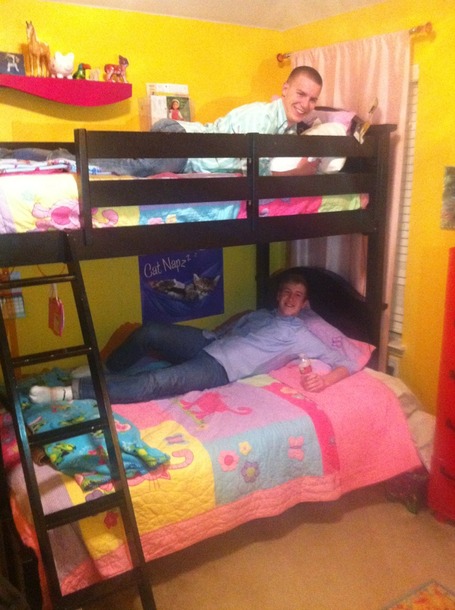 Update - We've arrived in El Paso and just settled in for the night, looking forward to the fan fiesta tomorrow and possibly going boot shopping.