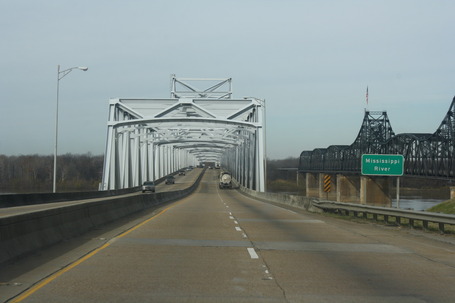 The view of the Mississippi River Bridge from I-20

Stephen "the Juggernaut" Webber is now in the driver’s seat of the Truck and successfully drove over the Mississippi River. This means that we’re now in Louisiana, the land of Creole, bayous and LSU fans (I can already smell corndogs...). Up to this point the drive has been th e exact same as we made a year ago out to Shreveport for the Independence Bowl, which was an interesting experience for all of those involved. We have an entirely new crew this year with the exception of myself (Mike "Mike" Macmillan) as it has become a rite of passage for the new leadership of our club to accompany the old driver to the bowl game.

In honor of last year’s trip, I want to share the highlights and the not-so-highlights from Shreveport:

Whataburger (we shall be making a return trip to one)

The alumni/student family that hosted us was fantastic and went the extra mile to make us feel welcome.

We lost to Air Force. 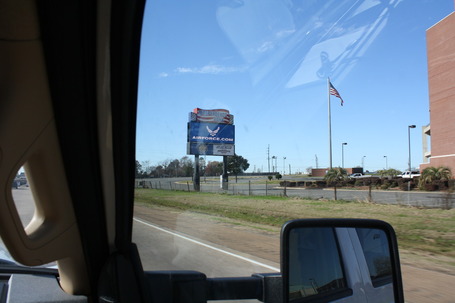 A couple of miscellaneous updates:

As per request, we’ll be taking more pictures and posting them to the blog, we got bit distracted with all the commotion of the leaving and packing, but now we have "nothing but time" as we make our trip out to El Paso. (you can see some great ones proving we’re now out of Mississippi above)

Some of the more eagle-eyed readers might have seen us on either 11 alive or CBS Atlanta news last night which talked a little bit more about the trip and both included interviews with various members of our traveling party.

Since we are strangers in a strange land, i.e. Tech Students in Texas, we'd appreciate if you post stuff for us to do in west Texas. Even if its just some good fast food places in Texas, none of us has ever been past San Antonio in the state of Texas. So far all of the advice we've received can be summarized in this quote, "I hope you don't get bored easily"

We've got a pair of cool events planned for Dallas, so we'll publish some more pictures and updates tomorrow morning when we're back on the road to El Paso.