Share All sharing options for: The Utah Run Defense of 2011: We will stop you! 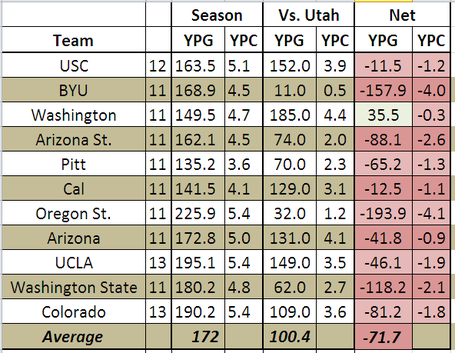 The Utah defense has been the focal point of discussions leading up to the bowl game and with good reason. They've held every team they faced in 2011's rushing offense in check. Only Washington improved their season average rushing yards per game against the Utes but every other team including the Huskies did worse than their I-A season average when playing Utah by almost 70 yards per game and around 2 yards per carry. The defensive effort of the 2011 season put the Utes up in the tops of NCAA stats: 7th in rushing yards allowed per game (98.25), 9th in yards per carry (2.97), and 2nd in rushing touchdowns allowed (6).

The front seven features twelve different players with at least 20 game appearances including four guys with over 100+ career tackles in Chaz Walker, Matt Martinez, Derrick Shelby, and Brian Blechen. Behind those big four the Utes have 8 additional linebackers and defensive linemen with at least 20 career tackles. The depth is reDUNKulous allowing the Utes to substitute liberally with little dropoff amongst most backups in the front seven.

In the starting seven up front, Utah has tallied 49 tackles for loss in 2011. That's more TFL than Air Force, UAB, and Akron have accumulated as teams in 2011. The Utes have only allowed 65 first downs on the ground as opposed to 139 passing first downs. Tech may need to look towards the air in order to win this game based on Utah's impressive 2011 run defense.