In anticipation of our last football game of the year, we reached out to Sean Reynolds, the manager of the Utah Utes blog Block U. Here we learn about the differences between the Utah and BYU fanbases, the infamous Emerald Bowl game, and the move from the Mountain West Conference.

. Let's talk culture first. Tech fans consider the University of Georgia to be the epitome of evil in the State. We constantly compare our alumni, fans, and universities but despite our differences UGA and Tech are fairly similar when we compare the culture clash that is Utah and BYU. Can you give the non-Utah native layman some insight into the State of Utah's biggest rivalry?

One is a public institution and the other a religious. So, those differences alone are stark. Yes, the University of Utah has a large LDS population, but it's far more religiously diverse than Brigham Young - which really shouldn't be a surprise.

Other than that, I wouldn't say the rivalry is too different from other ones because, in the end, it isn't about religion and solely about the mascot, the team and their school colors. Utah fans, most of them, anyway (I would hope) do not dislike BYU because they're predominantly LDS and likewise, I assume BYU fans aren't anti-Utah because a great deal of our fans aren't of the LDS faith. Sometimes religion does seep into the discussion and it generally doesn't lead to good things. So, at least at Block U, we try to keep the hate on the field and not necessarily in the stands. Sure, we have our jokes about their close-mindedness, the lack of caffeine sold in their stadium and their love of ice-cream, but that's mostly playful ribbing and not anything that could be construed as bigotry. Which would make sense, considering, as I said, the University of Utah has its fair share of LDS members - including the current president of the LDS Church, Thomas Monson.

I myself, though, was raised Catholic. So, I might have a different perspective on the rivalry than someone who grew up a Ute within the LDS faith.

2. We've got to talk about the 2005 Emerald Travesty Bowl. What was the spark behind Utah's motivated play in the swamp of a baseball stadium? Where does that game rank now in Utah's games of the 2000's in terms of importance?

I think most Ute fans are still trying to figure that one out. Certainly not many Ute fans felt we stood too good of a shot heading into that one, especially since we were starting a backup quarterback. But maybe that was the key all along. Georgia Tech's defense just didn't have enough film on Brett Ratliff and it gave Utah an advantage. Also, I think Kyle Whittingham, who is 6-1 in bowl games, is just down right scary good when he has enough time to gameplan against a team. So, I'm guessing the coaches found a weakness in the Yellow Jacket defense and exploited it. Plus, Chan Gailey really wasn't that impressive of a coach, right?

As for importance...I'd say it ranks fairly high solely because it was Whittingham's first season as a head coach and really gave us a taste of what he could do. Obviously, there are other games that rank far higher from that decade (Alabama in the Sugar Bowl, Michigan, TCU that same year), but it's definitely one of the more enjoyable bowl victories in program history.

3. Easy questions. Who is the 2011 version of Eric Weddle that will be matching up with Tech's Stephen Hill? Any other key defenders Tech should be aware of? 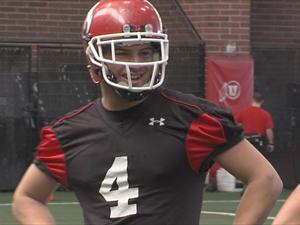 I'll go with Brian Blechen. He's a total stud...though, not quite on Eric Weddle's level.

4. I know Utah fans are pretty disappointed with the Colorado debacle but how has the fanbase welcomed in general the move to the Pac 12? Do you miss your MWC brethren?

Don't miss the Mountain West at all. Especially now that they're doing this weird mega-thing with Conference USA. Sure, the Utes came a game away from playing for the Pac-12 title and the loss to Colorado was devastating, but, even with our disappointing finish, we're still playing in the Sun Bowl...as opposed to some no-name, pre-Christmas bowl game like in years past.

5. What's the goal for Utah football in 2012 (especially if Barkley goes pro)? Can this team refocus and take the division next season or are the Utes losing too many upperclassmen?

Utah will lose some players on the defensive side of the ball, but their offense has the potential to be potent. Utah's leading rusher, John White IV, will be a senior, Jordan Wynn, god willing, should be healthy, and the Utes return most of their top receivers. They do have to rebuild part of their offensive line, which could pose some concern, but if Wynn stays healthy, and Matt Barkley goes pro, with all the coaching turnover in the Pac-12 South (Arizona State, Arizona, UCLA) and Colorado still not quite top-level yet, it's not impossible to expect Utah to once again contend for the Pac-12 South, and I think most Ute fans expect them to be far more consistent in ‘12 than they were in ‘11.

6. Considering Tech had a top D and Utah a top O last time the two teams met, what's the final score of the 2011 rematch where Tech has a top O and Utah a stellar D?

I won't tell you who wins, though.