Georgia Tech Bye Week: What Are Turkeybirds Doing On Their Respective Bye Weeks?

Share All sharing options for: Georgia Tech Bye Week: What Are Turkeybirds Doing On Their Respective Bye Weeks?

Both Virginia Tech and Georgia Tech have bye weeks before the big matchup on Thursday. So I went over to GobblerCountry and found old blogger friend, one of the originals, furrer4heisman stumbling around the internet looking for something to do. I asked him some hard hitting questions and I found out about his lawn mower, his shower tub, and his deep hidden love for the Yellow Jackets. Won't you join us?

1. Are you doing fun non-football during your bye weekend?
Non-football things? Probably not. I'll probably just camp on the couch and watch games, even though this week's slate is pretty lacking other than the big one. There's not a lot going on around here. I guess I could go see the new tiger cubs at the zoo or maybe I could stay home and drink beer. This just isn't a very exciting weekend. It's not like next weekend when MEL FUCKING TILLIS is going to be in town. Send me down to Tucson, bitches.

2. What Honey-Do's has your new wife given you to be completed by Saturday night? How bad is the shower clogged?
I keep my shower immaculate, thank you very much. However, there's a bunch of crap I've been meaning to put in the attic that I haven't gotten around to since it was 135 degrees right up until football season started. I also have to mow, which is going to suck. A lot. I hate mowing. It's even worse because we have an electric mower that has to be plugged into the side of the house. It's annoying and since we've had the thing I've run over two cords. That's about $30 down the drain if I'm going to get one long enough to reach the end of the backyard. Now I've gotten to where I can mow with one hand on the mower and the other holding the cord and swinging it out of the way so I don't run over it. It's like I'm vacuuming my yard. I'm pretty sure the neighbors laugh at me when I do it, which is pretty harsh on my self esteem. Wait, why am I telling you all this?
Winfield: Wait..a plug-in lawn mower?? Is this what you look like? 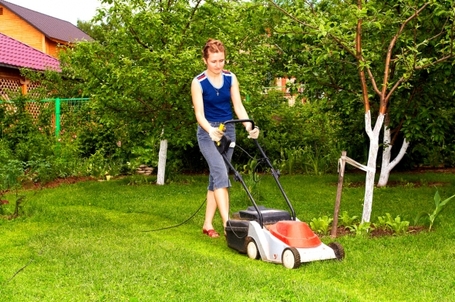 
3. Forget LSU vs. Alabama - as a college football fan what is the other game you want to watch this weekend?
Have you seen this week's slate of games? Woof. Other than Elleshoe-Alabama there isn't a good game in the bunch. There are a couple of real pyrite specials with Arkansas-South Carolina and Kansas State-Oklahoma State, but I think both of those will be blood baths. I'm sure Georgia Tech fans will enjoy the option porn at 3:30 when Army plays Air Force. I'll try to watch some of that. If you want games that have any meaning this week, you've really got to go down to FCS.
Maine and Towson are shockingly at the top of the CAA standings and play this week, but that game's available to only slightly more people than the Longhorn Network. The good match-up is Central Arkansas and Northwestern State from beautiful Natchitoches, La. The winner at least keeps pace for the Southland Conference title and the game is at least on ESPN3. Other than that? There's Oregon-Washington. It'll be on late so I don't have to stop drinking before 2 a.m. So, woo Oregon-Washington!

4. Say something nice about Georgia Tech.

Do I have to? Winfield: Yes, yes you have to.
All kidding aside, I really like this rivalry and I think at this point it is a rivalry. Anytime you get two teams like Virginia Tech and Georgia Tech who trade division titles the way they have, I think it becomes a rivalry. Now, both teams have other teams that are much deeper, much fiercer rivals than the other, but this is a game that has decided the Coastal Division ever since there's been a Coastal Division.
I hope it stays that way. These have been the two most successful teams in the conference since expansion and I think it's a fun rivalry that can continue to develop as long as the two teams keep a strangle hold on the Coastal and keep teams like Miami and North Carolina out of the ACC Championship Game.
I have a lot of respect for Georgia Tech -- this year's team, the overall football program and the institution. I hear a lot about Georgia Tech fans thinking that Virginia Tech fans don't respect them and I think that's false. I hear Georgia Tech fans get offended by Virginia Tech using "Tech." Who cares? If anything, CalTech should be pissed at both of us. And the idea that Georgia Tech fans believe that people at Virginia Tech think its engineering program is better than the one in Atlanta is crap. I've never met anyone from Virginia Tech who thinks this.
I think the people at Virginia Tech have more respect for the people at Georgia Tech than Jackets would like to believe. I know I do and everyone else I know does as well. It extends to the football program. There was the kerfuffle two years ago over chop blocks, which came about because Frank Beamer misspoke about which play he thought an illegal block occurred. He fessed up to the error and apologized. Does he or anyone associated with Virginia Tech's program think Georgia Tech is dirty? I doubt it. I don't think Paul Johnson or his players are dirty. I enjoy watching the Jackets play and watching his offense. I even root for the Jackets if it doesn't benefit the Hokies to have them lose.
This is a budding rivalry and one I think can prosper and do so the right way, based on mutual respect. The games between the two teams since Johnson has arrived in Atlanta have been tight, physical, entertaining games to watch. It's good football and the game always means something (at least in the ACC). Those are the best kind of games to watch. It why people watched Oklahoma-Nebraska in the 70s and 80s and it's why we're all going to watch LSU-Alabama Saturday. Will VT-GT ever be on that level? Certainly not, but for those who are unfortunate enough to follow and care about ACC football, it's the best thing the conference has going right now.
I will always look forward to this game because of its nature and the because of the friendship I have with the guys who run this blog. This is a fun game for me, unlike Miami, West Virginia and Virginia, which is based on an unquenchable thirst for blood. I hope it is for you guys, too.
Does that count as something nice? No? OK, well the Reck is cool. - Darn right it is!
Ok so we found out that f4h really Really REALLY likes Georgia Tech as well he should. Happy bye week everybody.