Share All sharing options for: Four Years Later It's Easy To See That The Paul Johnson Coaching Hire Was One Of The Best In The Country

After the 2007 season, Chan Gailey was fired from Georgia Tech. There was much discussion - and journalistic flaming - about how a football coach who never had a losing season was fired from the Institute. We all knew it had to be done because we were tired of the mediocrity of seven wins.

Four years later we can look back and see the shrewdness in Dan Radakovich's hiring process. DRad hit a home run with the Paul Johnson hire and made arguably the best hire in the country. In 2004, Dave Braine said we couldn't consistently get to 9 and 10 win seasons and that attitude should not be allowed in an athletic department. I don't think DRad has let that mentality remain either.

Since 2008, there have been 49 different coaching hires around big time college football. Of those hires there has been only 1 national championship (Auburn/ Cam Newton) and 5 conference championships turned out by four different coaches. Paul Johnson is one of the four. The Georgia Tech Yellow Jackets have won 33 games over four years and are on the brink of reaching the 9-win mark in three of those years. Success and progress are strong factors that are solidifying themselves with the Yellow Jacket football program. 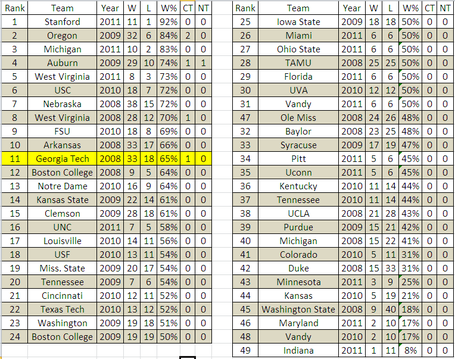 Do you remember who we all interviewed or who was a fan favorite in 2008? Let's catch up with them.

Now: Louisville head coach in his first season sitting at 7-65 with a bid to the Orange Bowl a strong possibility even after losing to teams such as Florida International and the Marshall Thundering Herd.

Then: A hugely successful Division II coach who had gone 7-4 at Georgia Southern with his "Hatch Attack" offense.

Now: Hand-picked successor to Rich Brooks. Just completed his second season where he went 5-7 (6-7 in 2010). Kentucky did end a 26-year losing streak to the Tennessee Volunteers to close the season on a high note.

Now: Just took over the reins at Florida and needs to clean up Urban Meyer's mess and lay a new foundation. Total work in progress.

Then: A former Georgia Tech assistant coach who took UCONN and made something of it. DRad didn't want to settle nor does he. An Edsall hire would have been settling for the same result with a different face.

Now: As of this entry, he remains the head coach at Maryland. But College Park is in absolute disarray so who knows. The Terrapins had a horrible year, going 2-10 in Edsall's inaugural season.

Then: Former defensive coordinator to Chan Gailey. Many wanted him to have his chance at leading a football team.

Now: Has moved from Notre Dame to NC State where he is the linebackers coach. I don't think he has interviewed for a head coaching position since he left Georgia Tech.

The Paul Johnson hire was, and still is, a good one. The Chan Gailey equilibrium was consistently seven games and Paul Johnson has taken us to 8+ wins a season on average. So Tech fans, while there are still plenty of areas for improvement, take a step back, and look at the progress along the way.