Share All sharing options for: Top 5 Offensive Warriors in the Georgia Tech-UGA Series since 2001

We already broke down the last decade's villains of Clean, Old-Fashioned Hate. After the jump, I summarize the top 5 warriors on the Georgia Tech side of the ball, offensively speaking.

Say what you want to about Reggie Ball's legacy but outside of one freak case of viral meningitis and the inability to attend classes in his last Fall, there was nothing that kept him off the field. He accounted for 37% of all quarterback touches since 2001. That included around 38% of the passing attempts. For comparison's sake, Joshua Nesbitt had 60% less touches at QB and he was second place on GT's list of most touches against Georgie since 2001. 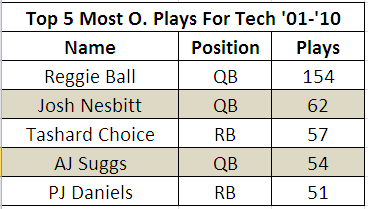 If I had to cite two reasons Tech played Georgie close through the mid-2000's, I would say Jon Tenuta and Tashard Choice. Tenuta's defense matured from its birth in 2002 to its full bloom in 2006. That D kept Tech alive late in games despite massive ineptitude from the offensive coordinator. And Tashard Choice was really the first Tech back since God knows when to have some decent games against Georgie. Choice averaged 5.8 yards per touch against the dog D and scored three touchdowns in three games. 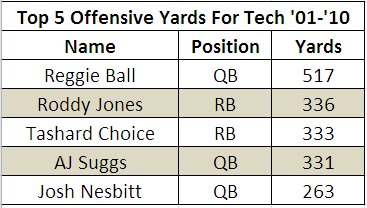 Similiar to Georgie's lines, several kickers made the cut on points scored in Clean, Old-Fashioned Hate. Between Travis Bell and Scott Blair, there were 12 made field goals and 9 made PAT's. Dwyer, Choice, and Roddy round out our top 5 as Tech passers haven't done diddly against a Georgie secondary since Joe Hamilton (hint: Georgie's had 12 players drafted from their secondary since Richt took over versus only 5 players drafted the 10 years prior to Richt's hire). 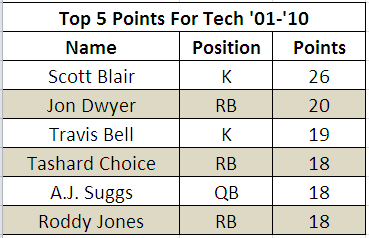 If there were a definitive warrior award in this series, I would give it to some of the Chan Gailey early stage guys that had to deal with really shitty coaching and little talent around them. Jonathan "Fast Freddie" Smith, for example, had 17 rushes and receptions against Georgie and even threw 3 passes from 2001-2003. He picked up almost 11 yards per play including two TD's. And for as much grief as he received, AJ Suggs actually had the highest passer rating against Georgie of the past decade with a 128.4. Why? Because his only competition in the stat were Reggie (78.3 passer rating against uga) and Paul Johnson QB's (107.9 composite passer rating).

Who do you think is the Tech's best offensive weapon of the past decade against Georgie? Dwyer? Nesbitt? Roddy?