Share All sharing options for: Top 5 Offensive Villains of the GT-UGA Rivalry

Let's take a gander at the past 10 years of the Tech-Georgie Rivalry. What Georgie players have burned Tech defenses the most? Who has scored more points or racked up more yardage against Tech since 2001 and laid claim to Greatest Villain of Clean, Old-Fashioned Hate of the Decade? 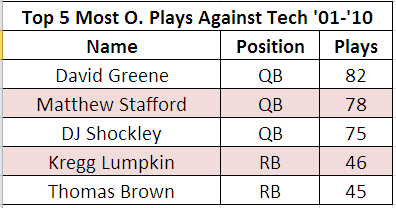 The next grouping is yardage. David Greene wins this round again. He played the worst Tech teams of this era and it shows in his stats. He had a career 151.3 QB rating against Tech, which was only bested by Aaron Murray and Matthew Stafford's most recent efforts against Tech. 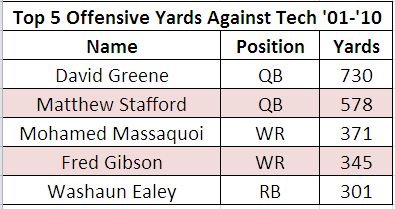 The final stat I pulled from the GT-Georgie archives was points scored since 2001. Two kickers made the list: Billy Bennett and Blair Walsh. Bennett kicked 11 field goals and 11 PAT's against Tech. That is probably a career record for opposing kickers against Tech. Stafford won this round, however, because of that crazy 2008 shootout. 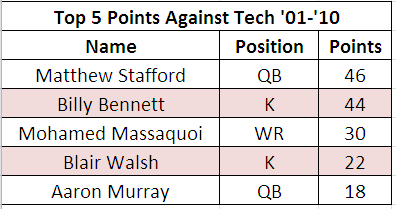 Who do you think is the biggest villain of the Tech-Georgie series since 2001? Are they from the offensive side of the ball or defense? I don't really mind the faceless mass of uga running backs other than Kregg Lumpkin. He always seemed to have a chip on his shoulder against Tech and proved it on the field. He picked up 4.6 yards per touch against Tech. Billy Bennett was always a huge douche as well. He used to kick ducks at the Tech student section during warm-ups. Let us know your thoughts...