Where do you rank Tech-UGA amongst Intrastate Football Rivalries?

Share All sharing options for: Where do you rank Tech-UGA amongst Intrastate Football Rivalries?

I took the 50 States and ranked them based on their 50 biggest intrastate rivalries. I ranked the Auburn-Alabama rivalry as #1 followed by the FSU-Miami-UF rivalry due to the fact that outside of Southern Cal those five programs have pretty much dominated college football the last 20 years or so. They have earned a little respect. Now, where do the other 48 state's biggest Division I football rivalries line up? 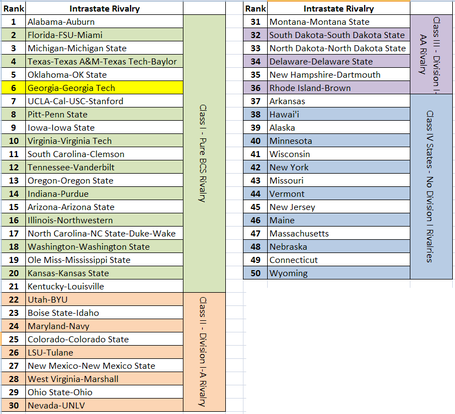 Think about intensity, national relevance, importance to conference prestige, or even importance in recent conference races. Is the Tech-Georgie rivalry overrated or underrated on my rankings?