Which Division is the best: ACC Atlantic or Coastal?

Share All sharing options for: Which Division is the best: ACC Atlantic or Coastal?

We've played 16 inter-division conference games in 2011 and the record is currently 8-8 for both divisions. A tie. There are two regular season match ups left along with the December 3rd ACC Championship Game. As a discussion point and means for passing time in mid-November, who do you think is the better division since 2005? 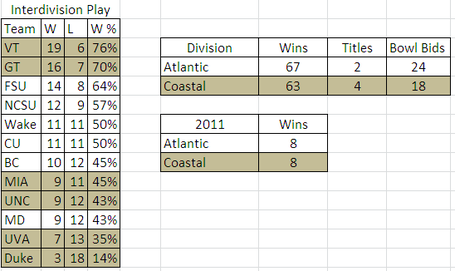 Let's start with the straight up head to head match ups. The Atlantic leads the Coastal all-time 67-63 including a 24-18 bowl berth lead. The Coastal, however, has won 4 ACC Titles to the Atlantic's two and features VPI and Georgia Tech, the only two ACC programs with greater than 70% winning percentages in interdivision play. A counterpoint to that statement is that the Atlantic has four teams with greater than 50% interdivision play while the Coastal's Duke, Miami, UNC, and UVA combine for a 28-54 record and none of the programs have a winning record against Atlantic teams.

If we're talking about talent, the best judge of talent are postseason accolades and the NFL Draft. ACC Coach of the Year favors the Coastal 4 times out of 6 years. ACC Player of the Year is split down the middle at 3 to 3. If we break down 1st and 2nd team all conference selections, draft picks, and pro bowlers, we see a lean towards the Coastal: 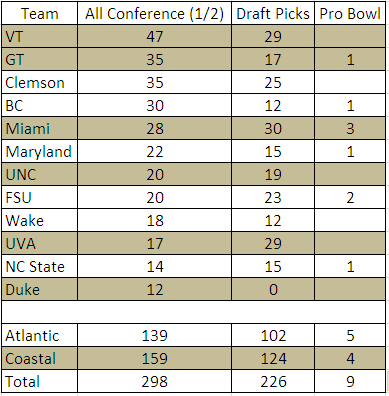 I'm glad Miami can produce talent 'cause that's about all they're good for. The final metric I want to look at is attendance. The Atlantic outdraws the Coastal by about 15% more fans per home game. Around 13 million people have been to Atlantic Division home games from 2005-2010 while only around 11 million have been to Coastal games. It definitely hurts having Duke and a floundering Miami program in our midst but that's how the cookie crumbles sometimes. 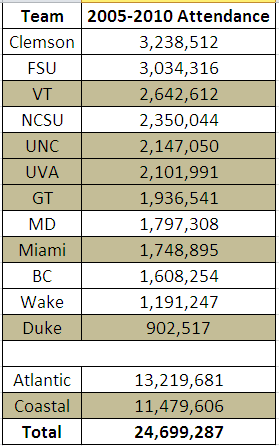 So who is better? The talent rich, top heavy Coastal or the parity laden, metropolis-sized-stadium Atlantic?