October 7 is quite a celebratory day for Georgia Tech:

27 years ago, your FTRS statistician and PTFE'r Bird was born.

113 years ago, Georgia Tech opened its doors to students.

We all know what Bird brings to the table on this site. Without him, we wouldn't have our number crunchings, powerpoint picture open threads, or blended RGB-value posts of the ACC. Happy Birthday, Bird, you old man. 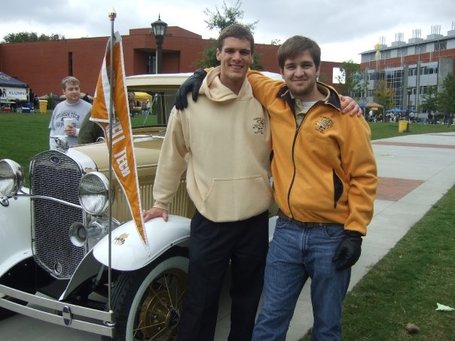 Old drivers back in the day

Georgia Tech vs. Cumberland and The Game of The Century

On this day in 1916, the biggest blowout in college football happened and the losers are probably more prideful about it than the winners but more on that in a second. The story goes that John Heisman was bitter towards the  Cumberland Bulldogs going back to the previous year's baseball season where he believed they purposefully ran up the score (Cumberland beat the Jackets 22-0).

During the 1916 football season, Cumberland tried to back out of the ensuing football matchup but John Heisman was such a sumbitch that he threatened them with a cash forfeiture fine of $3,000 if the Bulldogs refused to show up. Nevertheless, a kid by the name of George Allen, Cumberland's student manager, put together a team of Cumberland students to go and take the bullet for the honor of Cumberland. It was literally men against boys.

The story of Cumberland is quite embellished but a quick internet search let's you find a website put together by the school's historian, G. Frank Burns who discusses the game in greater detail than any of us can but here are some of my favorite quotes:

Cumberland's longest gain was NOT a two-yard loss; there was one forward pass completed for a ten-yard gain. Unfortunately it was fourth and 22 at the time. The truth is bad enough. Neither team made a first down. Cumberland couldn't, and Tech scored every time it got the ball.

Forty years later, a reunion was created for both teams. Here is a picture of them meeting at the line of scrimmage one last time. 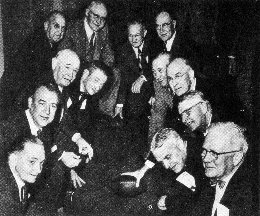 There are plenty of other pictures available on Cumberland's website as well. Check them out here.

Ma Tech let in its first students on this day 113 years ago. The first class was 129 students and only 28 of them actually earned degrees. There were only two buildings back then, Tech Tower and the burnt down Shop Building. You had one choice in a major, Mechanical Engineering.

If you are interested in learning more about the very early days of Georgia Tech, I suggest you head over to the Archives Department near the library. You can literally spend hours in that building pouring over old year books, class exams and photos. 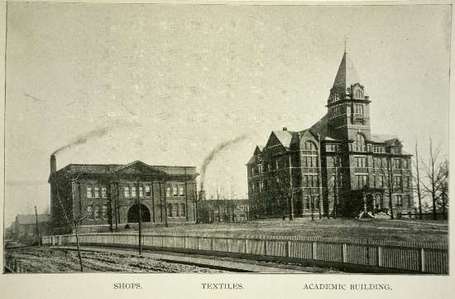 So Happy Birthday Bird, John Heisman et al, and especially you Georgia Tech. I cursed you, I thought about quitting on you, and even briefly hated you. But in the long run, we all know that I love you.