Georgia Tech vs. Clemson Compare And Contrast: Q&A With ShakinTheSouthland

Share All sharing options for: Georgia Tech vs. Clemson Compare And Contrast: Q&A With ShakinTheSouthland

As you know, every week we do some sort of Q&A with an opponent where we try to learn something from them that we didn't already know. We try to give back in the same manner and let those guys know what they're exactly dealing with when they play Georgia Tech. We do our damnedest to answer questions with as much vigor and effort that was put in by the questioners. This week's Q&A was with the Clemson blog ShakinTheSouthland. We also reached out to Willy Mac and Chili of the defunct Block-C blog because both parties are polar opposites. We apologize to the STS readers that we didn't break down multiple option attack schemes. Clearly you wanted a service that just wasn't in the list of provisions. We did really put time and effort into our work. Do you realize how much time it takes to figure out the difference in age and coaching experience between Al Groh and Dabo Swinney? The answer, BTW, is 26 years in both.

We generally believe that there are two types of Clemson fans. The first is the outwardly quiet, inwardly loud guy who loves Clemson football (or baseball).  A loss to Clemson fan type 1 is just as devastating as totaling an automobile or your house burning down. Clemson fan #1. He represents ShakinTheSouthland. 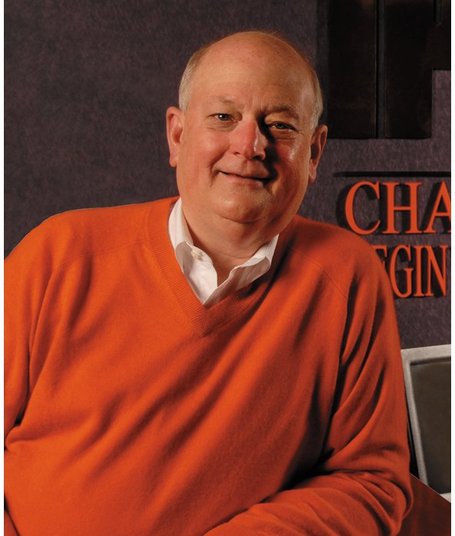 The second fan type of fan is exactly the opposite. He's a whoopin' and a-hollerin' redneck who just wants to have a good time, maybe chew up some tobacco, watch his Tigers, wear his overalls and/or blazer and/or both with a big 'ol wig Yessir, he may not care too much about scheme, but he'll sure get loud win or lose and we'll all know who's having a good time on Gameday. We give you, Clemson fan #2. He represents the Block-C party. 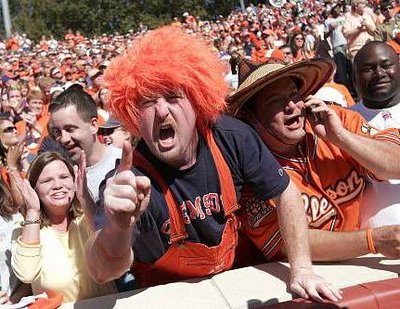 Fortunately, we interviewed both characters for this weekend's game. Through this manner we have been able to gauge the entire fanbase, compare the mindsets, and understand what's really going on in Death Valley.

FTRS: Do you miss Tommy Bowden these days? How about Tommy Bowden’s daughter? What about Terry Bowden’ daughter?

Willy: Seriously, screw Tommy Bowden. After having Dabo come in and completely change the mood and feeling around Clemson am I able to see how much he sucked butthole as a human being. He was a sack of shit. He was and still is a fake wanna-be shell of his father and he’s kind of a creep. He played a political game and wound up screwing us. I’m kind of glad photos of his daughter made the rounds in the intrawebs.

Editor's note: Why thank you guys, that's quite enlightening. ShakinTheSouthland did not receive this question so they were not given the opportunity to enlighten us on the Bowden family.  Sorry guys

STS:  I think there is a different mindset with Clemson fans regarding this year's team.  Dabo seems to be letting his coordinators do their jobs without interfering.  Chad Morris is the hottest name in the country when people talk about offensive coordinators.  Most Clemson fans feel like our offense can score every time they touch the ball.  This is much different than the feeling we've had in the past.

Chili / Willy Mac: Clemson definitely has had problems with GT, and those are rather frustrating coming against an opponent of GT’s relatively mundane stature. (See I can passive-aggressive the shit out of some Q&A too) Clemson fans always look at it as a trap game. Of the games remaining on CU’s schedule this year, this game and a possible rematch with VT are definitely the most losable. Also, of the games you listed above, two are in the second week of September, not exactly deep into the schedule there to be chest thumping about upending an undefeated team. Could Clemson drop another one to the Jackets? Surely. I hope not. Either way, Bobby Dodd is going to be empty WAKA WAKA.

FTRS: Tech has a new head coach in men's hoops and was picked to finish 10th in the ACC.  Clemson was picked 7th.  Considering Tech is not playing any true 2011-2012 home hoops games, who do you see winning the two Tech-Clemson games in hoops this season?  Do you think the Clemson program is headed in the right direction after the recent departure of OP?

Chili: As for the matchups, I couldn’t really tell you. I’ve been to a couple CU-GT basketball games and they were freaking ugly, man. I like Brad Brownell a lot, I still need to see him make some gains in recruiting, but otherwise it’s a nice filler until baseball season. Although I never cared for baseball season. Especially since Clemson raised the wall in the outfield and those assholes in the Cheap Seats bus take up the other free space. Seriously, those guys are assholes. Whatever, it was always more about the drinking and virulent heckling of outfielders for me.

FTRS: Clemson has allowed every field goal attempt to make it through the uprights (9-for-9). Who is on the hotseat within this group? How is the Tigers special teams preparing for the Georgia Tech kicking game?

Willy: I'll lend you a hand with the "Clemson is a redneck school" bashing with an easy to follow example. Listening to a Clemson guy watch our defense play over the past few games sounds a lot like listening to a redneck argue with the trailer door after his wife’s kicked him out of the double wide. Lot’s of stressed, half-english/half-drunk syllables and even more incomplete words and sentences. "Aww, come o- awwww... No! No! Naw! Now bayb- oh... oooh, ow! Oh! Now whutdja- epit- Awww!"

Chili: My favorite cereal of all time is Fruity Pebbles. I could eat it any time of day. I liked to take a Big Gulp cup and fill it with Fruity Pebbles, crush them down to compact them, then put more in there and fill it with milk. Was I stoned as hell during this time? Yes. Yes I was. The good folks at Cap’n Crunch proved they could make the best of a bad situation when they released unto the world OOPS! All Crunchberries. This cereal was a production line mistake, as clearly indicated by the title and the slapdash layout of the cereal boxes. Their mistake was a berry man’s windfall and for that I thank them.

FTRS: Which Dabo facial expression is your favorite? Why? 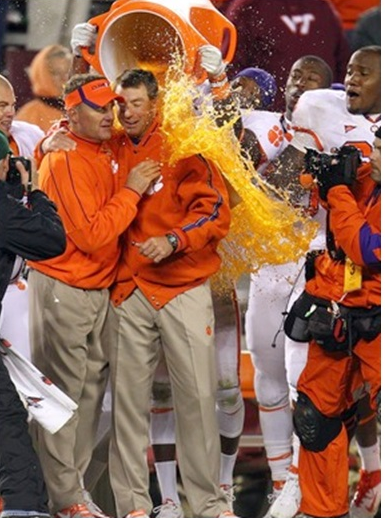 Willy:  Okay, so the last one is him obviously explaining why the team lost.


"We had some adversity thrown our way and well, shucks we didn’t step up to the plate. You know, we’re a great team with reyall vocull leaders and well we just kinda peedered out there right at the end... ya know and we practice all we-..."

The second picture is one of those "Not sure if want" facial expressions. Most likely he sees a big hunk of delicious cheddar cheese that he’d like to consume but there’s a few problems. It’s been sitting out in the sun for a bit so it’s kind of got that nasty, band-aid-feeling layer covering it. Another problem is, what if it isn’t extra sharp? I mean, it looks dadgum orange enough right? It looks so good but he’s been down that road. He knows better... but... but... just, what if? He could bite into it and it’s mild goop. Is that a chance that Dabo is willing to take?

I choose the first picture.. It’s a summer practice. It’s two a days and brother let me tell you what: IT’S HOT. He’s sitting on the back of the flat bed medical cart just SLAMMING cheap beer and waiting on that truck tire he filled up with dog food and tossed in the creek to fill up with catfish. There’s gonna be a fish fry tonight, sure enough. He’s been reciting McConaughey quotes from Dazed and Confused and several other movies the entire time and I am dying laughing. Yeah. This is what it’s like when me and Dabo hang out in my head.
Thanks to Willy, Chili and ShakinTheSouthland for playing our little game.
Oh and one last thing...