Sammy Watkins is leading the ACC in receiving touchdowns and receptions per game. He is averaging just over 15 yards per catch and is definitely Tajh Boyd's favorite target. Of the 287 times Tajh Boyd has let loose a forward pass, 82 of them were destined for Sammy Watkins' hands. Watkins hauled in 54 of those elusive butterflies with his giant nets for hands. 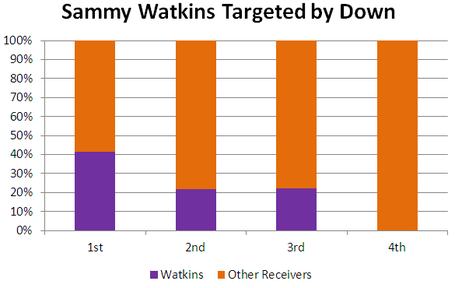 The first thing I noticed about Sammy's stats, which I thought was peculiar, was how Clemson left him out in the clutch. Tajh targeted him at a higher frequency on the less critical downs and situations (~40% of targets on 1st down but only 20% of targets on proceeding downs). I'm not saying Georgie's 2010 offense should be the basis for all things good but A.J. Green was a good example of how an offense should go through its go-to guy in clutch situations. It appears as if Clemson is straying away from this philosophy. 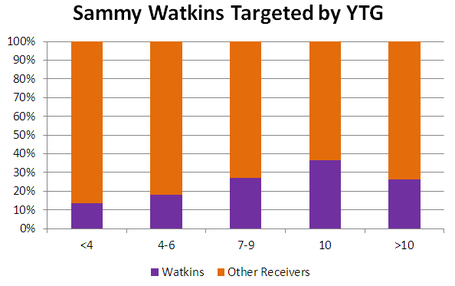 Probably the best explanation is that Clemson is not looking for Sammy to necessarily be clutch yet just merely explosive and get Clemson the big play every other down. To further illustrate my point think about these numbers from Clemson's #2 and #3 receiving threats Deandre Hopkins and Dwayne Allen. Allen has more 2nd down looks than Watkins and Allen and Hopkins both have about the same number of 3rd down looks at Watkins. There's no surprise that the tight end Allen has more looks than both Watkins and Hopkins when there's only 3 or fewer yards to gain a first down. And finally, in the red zone Sammy only has 5 looks while Allen has 14 and Hopkins has 10. 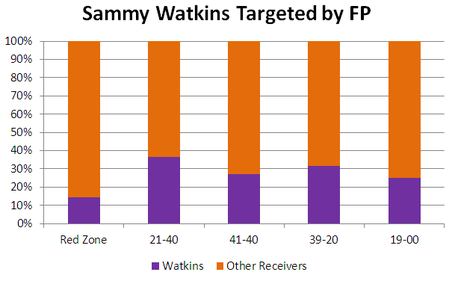 There is no doubt that Sammy Watkins will cause match up problems for any team in the ACC and Clemson is using his abilities masterfully. He is a force to be reckoned with by any ACC defensive coordinator. Tajh Boyd understands this, which is why he lobs one up to Watkins every three and a half throws. Let's just hope the Tech secondary is prepared to play the deep ball against Watkins and the underneath ball against Allen and Hopkins...