How do the Clemson Tigers play the game of field position?

Share All sharing options for: How do the Clemson Tigers play the game of field position?

The Tigers play the game of field position fairly well. Offensively, they've scored touchdowns on 39 of their 103 legit, non-garbage drives. Their average starting field position was only their own 33 yard line while opponents are starting on their own 28. Even better, the Clemson D and special teams have given their offense the ball on the opponent's side of the 50 seventeen times (versus only seven for opposing offenses). 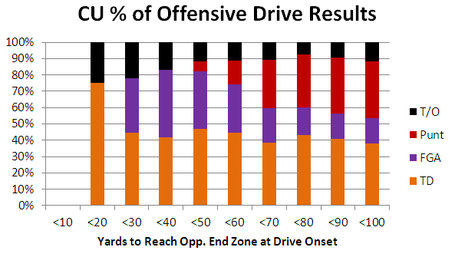 The first thing that stacks out in the chart above is the fact that the offense will score TD's 40% of the time no matter where they start up. The low TD percentage when starting in opposition territory is probably a subconscious thing. Dabo is just being conservative when he gets a free possession as opposed to a longer, more sustained drive. 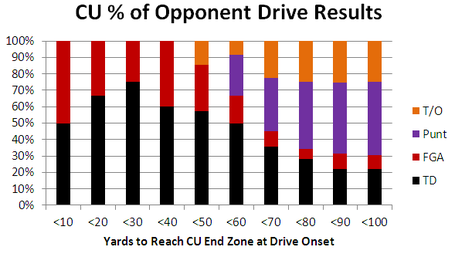 Defensively, the Tigers may appear a little inconsistent in the above chart. Opponents are scoring pretty much at will if they start within 60 yards of the Tiger end zone. However, this line is a little deceiving considering the Tigers have only allowed 12 such drives to occur out of 103 legit opposing drives. Their offense and special teams are playing incredibly well forcing opponents to play the long field. Unfortunately for Tech, special teams will be a huge factor in this game.