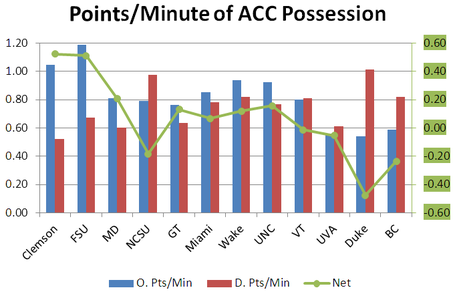 The above chart is a breakdown of two different stats for each team of the ACC up to date with only ACC games included. The blue bars equate to the amount of points a team will net per minute of possession in ACC play. For example, Clemson is 1.05 points/min so if they hold the ball for 30 minutes in a game, their offense will accumulate 31.39 points. This accounts for turnovers resulting in points for opposing teams as well.

The red bar is the opposite of the blue. It accounts for how many points a team's defense will give up per minute of the opposing team's time of possession. For example, GT gives up 0.63 points per opposing time of possession minute in ACC play so if the opponent held the ball for 30 minutes and 1 second, they should theoretically net only 18.91 points. Like the offensive blue bar stat, this awards defenses for scoring TD's as well.

The green line is the difference between the two with a separate scale on the right highlight in green. The green line isn't terribly important besides the fact that the closer a team is to "0" on the green scale, the more critical dominating time of possession becomes. If a team is allowing as much per minute as they're scoring per minute of possession, they need to control the clock. GT, Wake, Miami, UNC, UVA, and VT fall under this category. Duke, BC, and NC State are just out of it. Maryland, FSU, and Clemson don't care quite as much because their offenses score incredibly fast.

To me, this indicates (at least initially) that games involving GT, Wake, UNC, UVA, and VT should be relatively tight because most teams are going to get around 30 minutes TOP. We'll track this stat and see how the season progresses.